Elsie Yanik had enjoyed a lovely meal the night before she passed, spending several hours visiting at the care home she was staying at on Vancouver Island.  After getting back to her room she didn't feel well, an ambulance was called and she was taken to the hospital where she passed away peacefully in her sleep.  She was 99. 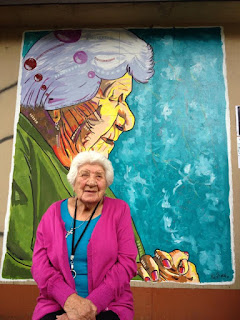 A photo of Elsie is the very first picture you see in my "Wild Colour Portraits" exhibition, a beautiful moment of that day in June 2014 when she came over to see the mural I had painted of her on the wall of Birdsong Studio - back at that time I called it "my shop". 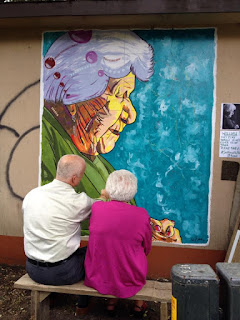 We sat together on a bench I had cobbled together from a piece of lumber I had salvaged from the shore of the Athabasca River looking at her portrait and talking about life.  That was a significant day for her for an additional reason; it was the anniversary of the passing of her husband.

Heather and I visited Elsie a number of times during those early months of my unexpected foray into art.  We brought her a copy of the photo sitting in front of the mural, kindly framed by Florence at Points North Gallery. 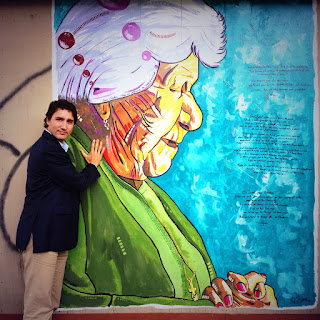 We went over to tell her the story of Justin Trudeau's visit.  And we went over several more times for Heather to give her reiki treatments.  Elsie loved company and she loved to laugh. 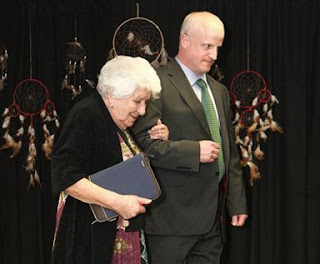 I had met Elsie many times over the years, often at large community events where she often shared the opening prayers.  At one Keyano College function, I escorted her to the stage so she could share her wisdom and serenity with the gathering.  Her voice was always soothing and soul-stirring.  She had a way of elevating an experience with her presence and her words.

She allowed me to borrow her prayer books - she had two binders full of them - so that I could add some of them to her mural.  Several are scribed right into the large painting viewable in the alley way between Hill and Demers Drives. 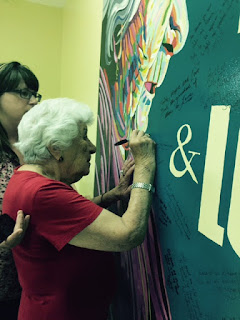 I painted Else a second time on December 22, 2014 on the wall of the Salvation Army mat program space, in the basement at their downtown community centre.  It was a very special day, capped off by staff members of the United Way and Salvation Army adding their words to the finished portrait I called Faith, Hope and Love.  Many months later, my friend Kate - who eventually befriended Elsie - brought her down to sign, too.

I last saw Elsie sitting in a wheelchair in the parking lot at the hospital.  She was getting some sun, accompanied by her son Lorne, who she often talked about.  Her eyes were failing her in the final years of her life, but her spirit and warmth remained intact right to the very end.  We had a small chat and I was able to give her a hug before saying goodbye.

Elsie has passed on after a remarkable and gentle life, filled with love, compassion and faith.  Like several of my elders who had gone before, I think that Elsie will always be close by and will continue to bless my life.
Email Post