As parents, we have never had to pack up smelly hockey gear and head to the rink at the crack of dawn.  We have never had to stand behind the backstop at a baseball game or sit on the mosquito endowed sidelines at a junior soccer game.  Our two sons have never been inclined toward sports.  I can't explain why things happened that way.  I'm guessing it might be that neither Heather nor I have participated in sports in their lifetime.

When I was a kid, I almost played it all: baseball, football, tennis, badminton, road hockey, volleyball, basketball, etc.  As I became an adult, the occasions when I moved my body in a game of some kind became fewer and fewer as the years went along.  So, by the time Dylan and Ben came along, sports were just not a part of what I, or we, did.  Heather did yoga and I performed and created art.  That probably explains why they both became creators and performers.

My responsibilities of getting them to and from rehearsals - they are both actors - has been light compared to parents supporting children in sport or in other artistic disciplines like dance and possibly music.  There have been the odd rides to the theatre required, but that's about it. 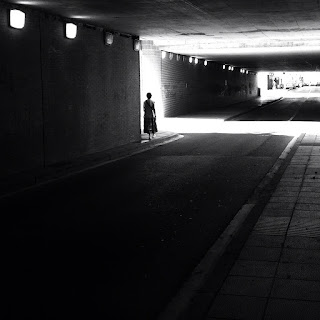 So, when Ben asked if I could drive him to a darkened underpass at 10:30 last night, I was happy to oblige.  I was also happy to be woken up around 1:30 am to go and pick him and his buddy up.  What where they doing at a darkened underpass late at night?  It's probably not what you are thinking.

They were shooting a scene for a short film they are doing, both dressed up in period costume and carrying all their gear.  Writers, directors, actors, camera operators, sound engineers.....it's just the two of them, bringing an idea to life using simple tools and good old fashioned initiative.

As an example, they needed cigarettes for the shoot.  Instead of asking their parents to go out and buy them a pack, they experimented for weeks with making fake smokes, trying different material in place of tobacco.  I think they landed on tea leaves.  They also made their own period cigarette package.

No budget, no fancy equipment, they are taking an idea and doing whatever it takes to get it filmed and edited by the submission deadline for a contest they want to enter.  The prize:  filmmaking software.

Our older son also rolled in early this morning.  As an 18 year old, he very likely could have been getting into all kinds of mischief.  But, he wasn't.  Dylan was on an independent film shoot.  Based on the time they both got home, Heather will have a quiet peaceful house for the first part of the day.
Email Post