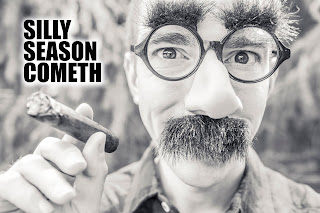 As August begins to bleed into September, talk about politics will escalate quickly.  This period of time leading up to a municipal election is often referred to as silly season.  We're getting a double dose of it this year, as the fledgling UCP party goes through the process of selecting its new leader.  Over the next few weeks and months you are going to see skeletons coaxed out of closets (what happened with Mr. Fildebrandt yesterday), wild proclamations about what people will do if elected (most of the time they are well meaning but have no idea how local government really works), and old issues rise out of the ashes and re-ignite emotions (expropriation, City Centre, wage increases, etc.).  Be prepared for it all, because it's starting already.

We had a new individual enter the race for Mayor this week, a fellow named Anthony Needham.  I'm not sure why someone with absolutely no council experience would run for the big chair, but more power to him.  Anyone who decides to put their name on the ballot deserves credit.  It's a big commitment, fraught with challenge and, at times, controversy.

As a voter, my only advice - if I dare offer it - is that you give sober second thought to anything that gets under your skin.  If a candidate says something or does something that incites your rage, or if another feeds into a particular point of view that you hold gets you excited, take some reflection time before jumping in with both feet, or with your guns "locked and loaded", as Donald Trump tweeted this morning about his tête-à-tête with North Korea.  Populist politicians know there are multiple hot button issues out there and they will naturally gravitate towards them.  Politicians who are interested in solutions and moving forward will strike a recognizably different tone.

On the provincial side of things, Brian Jean is off to a great start in his leadership bid for UCP.  However, these are early days, and Mr. Kenney is no spring chicken when it comes to politics.  He'll fire things up and make it a race for sure.

Here at home, Don Scott appears to be the mayoralty candidate to beat.  His track record, locally and provincially, and his decision to announce early give him a strong edge. He certainly has my support; I'll be absolutely forthcoming about my bias. I'm guessing that more names will pop up on that section of the ballot, perhaps even one or two other familiar names.  You can bet conversations are happening behind the scenes and at family kitchen tables as to whether or not to take the plunge.

I'll be quite content sitting this one out and cheering from the sidelines.  A lot of good people will be standing up to serve.  I'll be paying attention to see which ones are ready to move forward and take a solutions oriented approach to governance.  Those that get stuck in the muck and don't offer a path to the future will get my respect for stepping forward, but they won't get my vote.