It is late in the evening, the same day that I did a live painting of Mark Messier.  I should be sleeping, as I have felt a little numb since getting home.  However, my body doesn't want to shut itself down quite yet.

Live painting days are rather intense. They start bright and early with last minute packing and in this case, a drive into the city. The Gordie Howe C.A.R.E.S. Pro-Am Luncheon was being held at the Telus Convention Centre in downtown Calgary. I had been at the same facility just a few weeks ago when I attended a session with astronaut Roberta Bondar. In other words, I didn't have to stress out about where I was going or where I was going to park. Those two details can easily cause me stress. 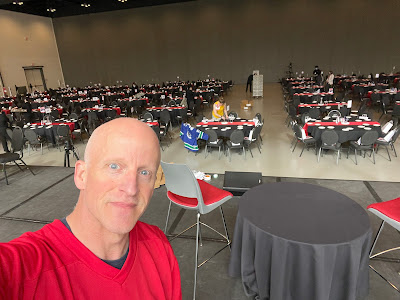 I like to arrive at the venue nice and early. It allows me to get my gear set up, become comfortable with the space and check in with the organizers. Arriving early also allows me to troubleshoot when the situation demands it. In the case of this one, I had an over abundance of natural light pouring in from the east facing windows in the ballroom. As the sun was shining directly on the back of the large canvas, it distorted my view of things. My solution was simple. I grabbed an empty cardboard box, broke it down flat, and taped it to the back of the canvas using some gaff tape that Larry provided for me. I don't know what Larry's exact title was, but he seemed to be in a stage manager role, or something similar. The problem was solved.

When doing these high pressure live painting events that culminate in the auctioning off of my work, I have to time things just right. I spend the first two hours in the space doing all the "boring" stuff.  In the case of this painting it meant laying down several coats on the background and on the jersey.  I also did an undercoat in the area of the canvas occupied by the Stanley Cup.

I put the brushes down a minute or two before they wrapped up the conversation and the auctioneer from Ritchie Brothers came on the stage. 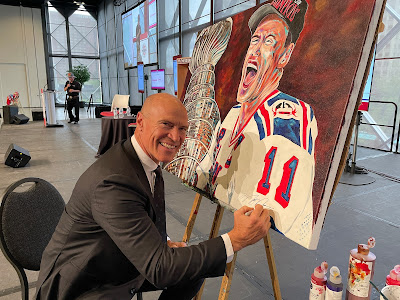 Mark was gracious in signing the finished painting as the bids started flying back and forth. I think things started out at $5,000. By the time the dust settled, the painting had sold for $24,000, supporting the great work of the Gordie Howe C.A.R.E.S. organization helping individuals with dementia and their families.

These experiences are always a little blurry in my memory. I get in the zone and focus all of my efforts in bringing the painting as close to completion as possible. It's always a special moment when the subject comes up to add their signature. It's also fulfilling when the bids close and thousands of dollars are being offered for something I spent the last three or four hours creating. That the funds support great charities makes it extra sweet. 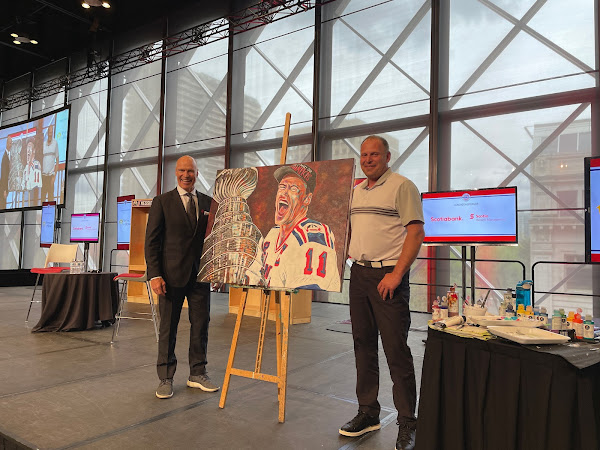 My previous sales record was $18,500. This one blew the lid off the record thanks to the skill and tenacity of the auctioneer. He gets all the credit, along with Mr. Messier for being one of the most respected and revered hockey players in history.  The generous soul who offered the bid was Mike from VDM Trucking in Edmonton. I'll be doing some finishing touches in the studio and shipping the painting off to him next week. 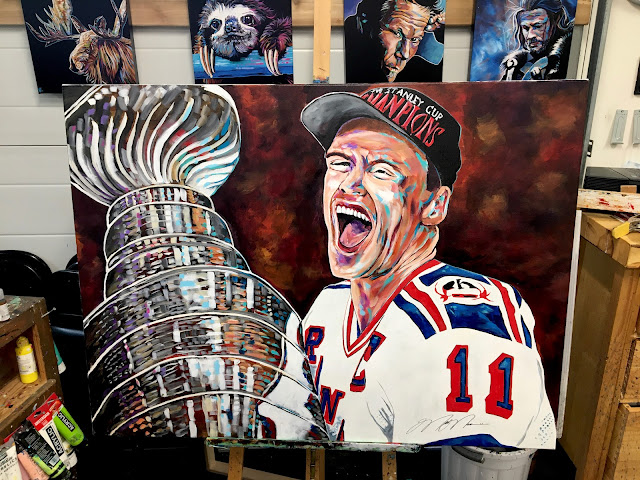