This following appeared as an Op-Ed in the Edmonton Journal on May 19, 2106. 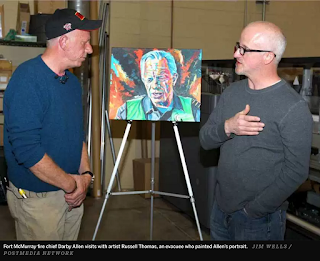 There are a number of images that linger from the day of the fire: the RCMP officer directing traffic at the busy intersection with the fire getting closer and closer, the poor lady lying on the pavement at Greely Road School unable to breathe from the smoke, and the flames in the rearview mirror as a long line of vehicles inched our way out of town to safety.

I was shaking, more terrified than I had ever been before.

The further apart I became from my wife and sons — they were downtown, on the other side of the inferno — the more I felt my painting life fading. I had the shirt on my back, flip flops on my feet and painting supplies in the trunk, but the thought of using them again seemed unfathomable at the time.

I wrote a blog post titled “My city is burning” the first morning of my new life as an evacuee. None of us knew the extent of the damage and we were facing a day that had the potential to be worse than the day before, with high temperatures, low humidity and brisk winds.

I evacuated further south to Edmonton on that day, and to Calgary the next, where I met my family as they arrived on a Canadian North flight from CNRL.

Being forcibly separated from family by a raging fire is not something I ever thought I would experience. Holding them in my arms as they stepped off that plane in Calgary is a family hug that none of us will ever forget.

I immediately felt whole again. All of a sudden, thoughts of painting returned and shortly after, the action of painting.

First, I completed the portrait of Chief Dan George that I had started just before the fire on May 3 at the Mark Amy Treatment Centre as part of a staff development workshop. Then I spent a morning painting with my seven-year-old niece Julia; our subject: the hopeful horse.

The portrait of Fort McMurray fire chief Darby Allen happened on Mother’s Day and was viewed and shared online by tens of thousands in the days that followed.

Darby came to see the painting in person Tuesday at Run Digital Inc., the company that has given me free office space and is helping with the commemorative prints being used to raised funds for the www.unitedforfortmcmurray.ca campaign. It was a very special visit, especially the quiet moments our family had with the chief before doing the unveiling in front of full room of cameras and reporters.

We sat at a picnic table outside the printing company and shared our appreciation for everything he and his team had done. It was an intimate and emotional; it was heartfelt and intensely real.

He talked about his team with admiration and respect. He spoke of the spouses of the first responders, the support people, and the team effort that enabled one of the most remarkable mass evacuations in Canadian history. 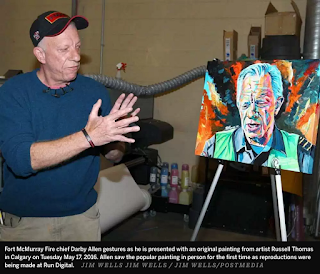 Standing in front of the painting, Darby shared his thoughts about what he saw and what it meant. He didn’t see one man, he saw hundreds of men and women who demonstrated courage, determination and heart.

The chief reunited with his wife, Maria, Tuesday afternoon and planned to spend a few days enjoying the solicitudes of family. I’ll keep painting and preparing for when we finally get to go home.
Email Post