My city is burning

This is a blog post I never really thought I would need to write.  I am sitting at a computer at the temporary base of operations for the United Way, space provided by one of our agencies, the Mark Amy Treatment Centre.  I drove out here around noon yesterday to do a staff development workshop.  As I left Fort McMurray, it seemed to be a beautiful day with very little smoke, and certainly no visible fire.  That all changed about an hour later when the wind shifted.

We started seeing reports on Twitter of a flare up followed by mandatory evacuation notices.  It took only minutes for us to make the decision to head back to town to be with our families.  None of us made it. 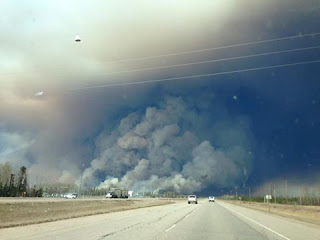 By the time I got to the area just past the Sawridge Inn and Conference Centre in Gregoire, the inferno was about to encroach on the highway.  The line of traffic wasn't moving, so I decided to move out of the traffic to what I perceived to be a safe location at Greely Road School.  There were no trees in the general vicinity, and it seemed to be a good spot to collect my thoughts.

At one point, I considered parking my vehicle and running down the hill.  I know now it was a foolish notion, but all I wanted to do was get home to my family.

Quinn, the principal of the school was there.  It was good to see a friendly face in the middle of the chaos.  I was able to fill my water bottle, use the restroom, and begin the next leg of my journey back south to the Mark Amy Treatment Centre.  It took about three hours, but I made it safe and sound. 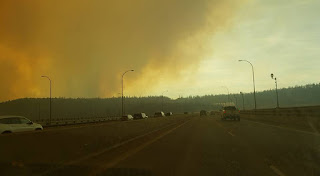 Meanwhile, Heather dashed to the school to get Ben.  Dylan was already home as he had not been feeling well that day - thank God!  Had he been up at Westwood, the situation would have been ten times worse for Heather.  As it stands, she and the boys gathered up important documents and a few basic supplies and got on the road north. 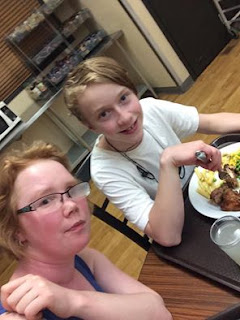 I was so grateful when I knew they were out of harm's way, more grateful when they were all in bed for the night - Dylan at his mom's in Fort McKay, Heather and Ben at the Barge Landing camp. 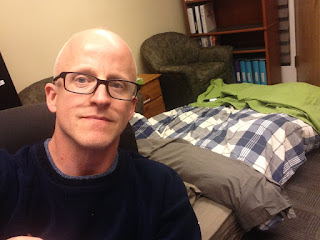 I jumped into communication mode right away, knowing that I was in a safe place to provide a voice to media outlets hungry for commentary about the fire.  I can't count the number of interviews I did last night and this morning.  I was on television with Ian Hanomansing at one point.  I vaguely remember getting something caught on my throat at exactly the wrong moment.

I did long interviews with Rick Zamperin, a former radio colleague, now on air in Hamilton.  Sarah Penton put me on her show in Winnipeg - we did a play together many long years ago.  And I did my regular update with Wally Desjarlais on CFWE, to name a few.

I shared horrifying stories of what some of the people here went through to get out of town - walls of flames on both sides of the highways.  I tried to capture the horrible and long exodus to safety that so many people went through last night.

This story is not over.  We have a day ahead that will determine how much of our community will be salvaged.  Pray for Fort McMurray.