Return to the Monster

The first time I painted the Frankenstein Monster, it was at one of Robbie Picard's oil sands parties surrounded by 700 people in Halloween costumes dancing up a storm.  It was exhilarating and intense as that first portrait came together in just under two hours on a little 4-foot by 8-foot riser adjacent to the dance floor back in 2015.  It was auctioned off during that frenetic event and raised $7,500 for the United Way campaign.

Several other commission requests followed in 2016, including a re-paint of the first on; it was lost during the fire out in Saprae Creek.

I woke up on Saturday morning, set up my iPhone on time lapse mode, and got the first layer of paint done in just over an hour.

Several more hours followed along with some splatters to add some energy to the finished 24" x 48" portrait.

I went into this project with an idea that just wouldn't leave, so I went with it.  This painting is being auctioned off on the Russell Thomas Art Facebook page until 9 pm MST tonight, October 16, 2017. I have to say the time zone because a lot of people who follow my page are in different locations around the continent.  After the purchase is completed, I will be donating the same amount to the United Way in support of the 2017 Community Campaign. 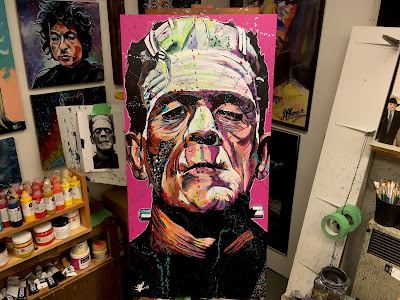 If you feel like putting in a bid, but wish to remain anonymous, send me an email or text.

Honestly, it feels like I haven't had the chance to help as much as in previous years.  As this is my last month working with United Way, I wanted to do something a little extra.