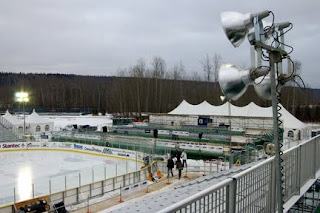 In late summer 2010, a group of community leaders came together to hear a pitch from MacDonald Island COO Tim Reid. The thought was to plan and execute an outdoor junior hockey game which would be the first of its kind in Canada. To pull it off, we would have less than three months and need to mobilize incredible resources. When asked the question as to whether we could do it, twenty-two hands shot up in the air.
With that enthusiasm and after a whole lot of hard work, fans started arriving for the game yesterday afternoon shortly before 4 pm. An hour later the bleachers were already 75% full. By game time they were overflowing, a standing room only situation, with many having to watch the game on the big video screens suspended from trussing on both sides of the main stage. 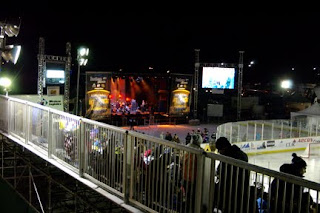 I was up in the media box for awhile, but as the number of photographers and reporters started showing up, I surrendered my prime viewing spot and began a walking tour of the venue to find somewhere that offered a glimpse of the action. From the Zamboni end of the ice, around to the main entrance and back in front of the main stage area, there were so many fans that even catching a glimpse of the ice was virtually impossible. In the end, I wriggled my way through the throngs trying to get into the beer garden to go into the minuscule empty space just in front of the stage to stretch my neck way up to watch, almost directly underneath the video screen. That worked fine until there was a pause in the action and the music started. I didn't realize I was standing right in front of the huge speakers driving the bottom end of the audio. It nearly knocked me off my feet. 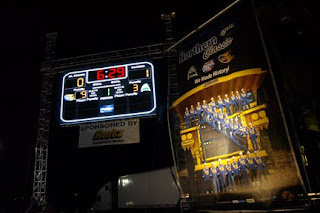 No view of the ice, no place to sit, hungry and mildly thirsty, I just didn't care. I was at the Northern Classic, in the middle of the most amazing energy that I've ever felt. Eventually, I made my way over to the VIP area where the Municipality folks were hanging out. And while there was still no effective way to watch the game there either, it didn't matter. When the red light turned on, the crowd exploded and we'd start to clap and cheer. It was awesome.

The final attendance was tagged at 5,726, breaking the previous AJHL attendance record of 4,400. The game is now in the history books as the first regular season junior hockey game to be played outdoors in Canada. It also served as the venue to announce the fundraising total for the Fort McMurray United Way Campaign, which also achieved a record, raising over $6 million, certain to cement Fort McMurray's position of being the most generous community (per capita) in Canada. 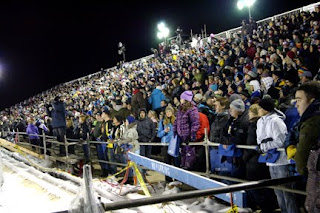 Two nights earlier, an incredible picture was taken by a fellow named Sunshine Chen, flying overhead in a helicopter. The striking image was posted on Facebook by one, put on Twitter by another, and retweeted many times over. By the following morning, the aerial shot had been shared, forwarded, and seen by hockey fans from across North America. 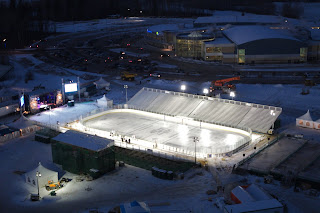 Sunshine was up in the air again last night, this time tethered to a fixed wing plane to capture the scene at the Northern Classic with the stands full. 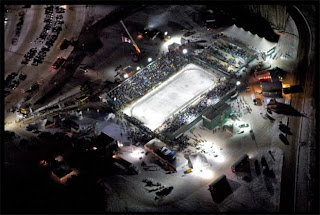 What does all of this say about Wood Buffalo and the truth about Fort McMurray? Well, I think it solidifies the notion that if we dream it, we can make it real. It illustrates the power and potential of the BIG SPIRIT that defines us. It affirms our love for, and connection with, the great Canadian game of hockey.

During the Salt Lake City Winter Olympics, an ice-maker secretly buried a loonie under the ice. And while burying a loonie would make a lot of sense anywhere else in Canada, in Fort McMurray our currency is a little different; it was oil sand that was secretly buried under our ice. 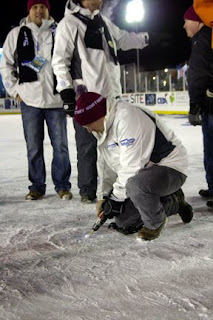