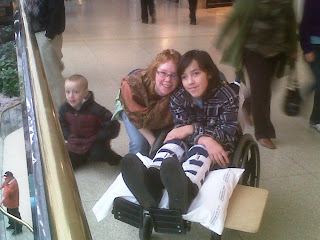 Dylan was ready to escape the hospital for a few days when we arrived on Remembrance Day, eager, excited. Unit 201 was oddly quiet early in the afternoon as most of the patients had been released for the weekend. The single nurse on duty gave us instructions around how to get in and out of the car, medication to take and how to get him set-up for bed.

"He's such a good kid," she said. "We really like him around here, he's just so engaging and polite."

We loaded him up into the Escape, transferring him from the wheelchair to the walker to the front seat. His legs wrapped in Zimmer splints and feet nestled in his AFO's, we had to have the car seat as far back as it would go in order to get him in. The walker and the wheelchair both folded up and fit (just barely) in the back.

Over the course of several days we got him out of his familiar hospital confines to restaurants, the mall, the movies, the art gallery, and evenings with friends and family. We jammed a lot of activity into a short amount of time, and in the process we figured out more efficient ways of getting him from place to place. In the beginning we carted both the walker and the wheelchair around, then we dumped the walker in favor of the chair, then finally settled on the walker as the best means of conveyance.

"Can I get my hair cut?" asked Dylan.

I almost fell on the floor. I had to pay him $10 to cut his hair last time. Since then, his mane had grown long and full. 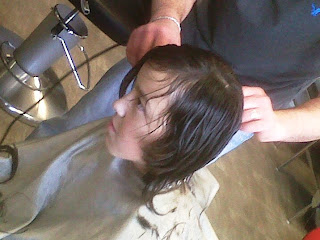 "I want get to rid of all this in the back," he said, twisting his head back and forth swinging his deep black locks hither and thither. 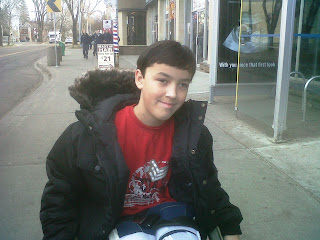 So, on our walk to Rodeo Burger for dinner, we slipped into the hair salon and transformed his look in 20 short minutes.

We will go for dim sum tomorrow morning with his grandpa and grandma, and his uncle and aunt before delivering him back to the Glenrose for his final stage of physiotherapy in preparation for his return to home mid-December.
Email Post