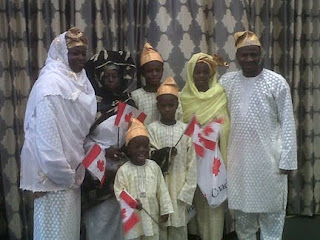 I performed my first official duties as Acting Mayor of the Regional Municipality of Wood Buffalo yesterday, filling in for Mayor Blake at two Citizenship ceremonies at MacDonald Island Park. With all due respect, I'm so glad Her Worship was out of town as it gave me an opportunity to participate in something truly wonderful.
It's hard to imagine the journey that got them to this day, when they would stand with their right hand raised, repeating the Citizenship Oath to become Canadians. For some I spoke to the process had started four years earlier, for other ten years. In some cases, according to Citizenship Judge Sonia Bitar, the quest to become Canadian had taken 15 or 20 years.
Looking over the crowd of mothers, fathers, grandparents, children and friends you would have been struck by the level of anticipation, joy, pride and an overwhelming sense of import, that something miraculous and life-changing was about to happen.
Judge Bitar had the 70+ people, young and old, rise and say the oath in both languages. And while the French version was much more mumbled than the English one, they gave it a good try. And with that, they were Canadian citizens. It's hard to describe the richness of the smiles that followed. 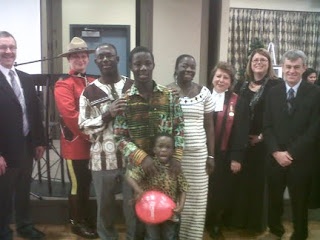 They had come to Wood Buffalo from China, Iraq, Iran, England, Australia, Nigeria, Afghanistan, and 27 other countries from around the globe. They add to the cultural richness of our region that is beyond measure in my view.
Being able to congratulate almost 150 New Canadians over the course of two ceremonies was one of the highlights of my life. Being able to give each and every one of them a Regional Municipality of Wood Buffalo commemorative pin was an absolute honour.
Congratulations and welcome to our Canadian family!
Email Post