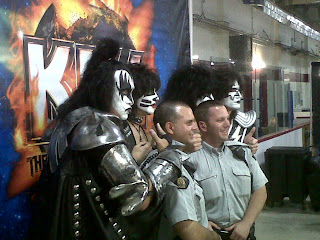 Right after two Fort McMurray RCMP officers had their picture taken, it was our turn.  Dylan and I stood at the ready as Gene Simmons, Eric Singer, Paul Stanley, and Tommy Thayer posed against a backdrop featuring their tour logo.  A box with an 8-inch lift had been pre-placed on the ground, giving Mr. Singer a little boost so he could measure up against the towering Mr. Simmons.

Gene was immediately efficacious in making a connection with Dylan, giving him knuckles and a beaming smile.

"Hi Gene, great to meet you," I said pounding knuckles, feeling way younger than my age would suggest.

All of a sudden, at least in the case of Gene and Paul, the two original members of the band, I was surrounded by the looming icons of my youth.  It was surprisingly surreal and a moment captured by their professional photographer. 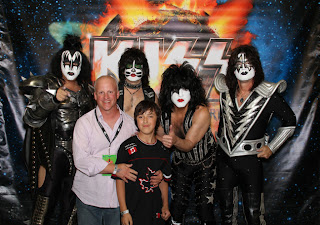 My friend Jim Cressman with the Cressman Sakamoto Agency (CSA), the firm that negotiated the tour, captured the moment from a slightly different angle. 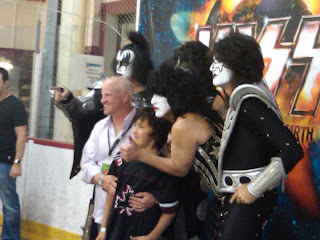 The picture, while slightly grainy, captures it perfectly.  It was the penultimate close encounter with greatness, though it felt like they were just four of the guys, friends, neighbors, even family. 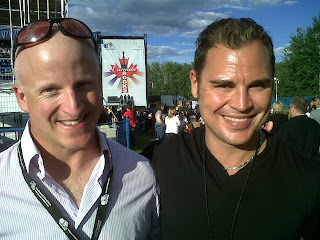 Jim grew up in the small community of Donalda, north of Stettler in Central Alberta.  I had forgotten that fact, always associating him with the area near Calgary where his parents ranched.  He worked for me at one point, living in the basement of my old house in downtown Drumheller before moving on to a radio gig in Brooks and finally Calgary.  In 2000 he left the broadcasting business and eventually hooked up with one of Alberta's most successful concert promoters, Ron Sakamoto from Gold and Gold Productions, and formed CSA.  Jim is the President of the company and worked closely with agent Paul Biro to secure the KISS date for Fort McMurray, the only outdoor show on this leg of their tour.

Moments after Dylan and I made it back to our place at the railing in the right VIP area THE HOTTEST SHOW ON EARTH began.  It was a feast for the senses from start to finish.  At one point, they had their photographer take a shot of them and the crowd from his perch on top of the drum kit riser.  This is the money shot.

It was the biggest concert in Fort McMurray history.  While the final tally has not been made public, I'm sure that there were at least 12,000 souls on that site.  According to numbers released by MacDonald Island Park, it took a mere 30 minutes to clear the concert facility and a further hour and 15 minutes to get everyone off the island.  With 500 volunteers, 150 security (including RCMP, bylaw and emergency services personnel) and staff from Events Wood Buffalo and MacDonald Island Park, the event was almost incident free.

As they dived into their classic Detroit Rock City I tweeted the following: Paul Stanley declares Fort McMurray a ROCK CITY as the Clearwater River Valley rocks like never before. KISS in #YMM.  It, along with an earlier tweet featuring the photo of Fort McMurray's finest with the band, ended up getting picked up by @KISSopolis and tweeted to their 13,000+ followers.  I can't imagine how much play the money shot is going to get today in the social media universe.

Watching from our spot in the VIP section next to the media folks, we had a great view of both the crowd in front of the stage.... 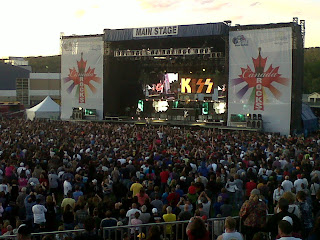 ...and the crowd in the beer garden. 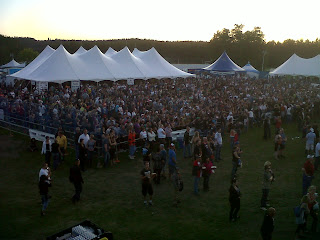 There were a lot of people on the site, about as many as you could fit safely.

What was remarkable and truly hard to understand is how bits and pieces of this experience are going to be shared.  Almost everyone, at some point or another, captured a picture or video clip of the concert and have shared it with their circle of friends.  It is safe to suggest that the success of this event, its powerful images and sounds, will eventually resonate around the world as it was truly a global audience, reflecting Wood Buffalo's cultural diversity. 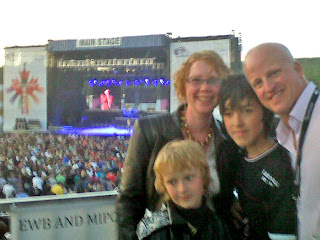 Fort McMurray is now on the map as having the interest and ability to host events normally reserved for the million plus cities.  Negotiations are already underway for 2012 and believe me when I tell you that KISS is only the beginning.
Email Post