It was our first weekend at home without the kids since Ben was born over 8 years ago.  We decided to take the opportunity to go on a rare overnight tenting adventure to Gregoire Lake.  The last time we did that it was the May long weekend of 2001.

We had pitched ourselves that year alongside Mariana Lake, just south of where the store and gas station used to be.  It was a wet, cold and rugged experience.  Our seemingly insouciant trip this weekend to the provincial park, a short 20 minute drive out of Fort McMurray, ended up testing our monsoon camping skills.

The heavy rain had not arrived yet as we set up the tent and did our best at affixing the blue tarp to the dearth of trees at the campsite we'd booked online, sight unseen.  We managed to eek out a sliver of protection from the rain that was becoming increasingly present as we neared the completion of our set up.

As if on cue, the monsoon let loose its fury as we tapped in the final peg and tied off the final length of rope.

"Oh my God it's muddy," said Heather as she tried to negotiate the slight incline back to the car, slipping and sliding. 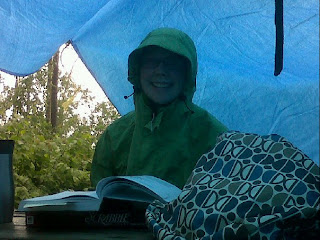 We spent much of the afternoon reading and enjoying a leisurely nap to the soundtrack provided by the pelting rain and blowing wind. 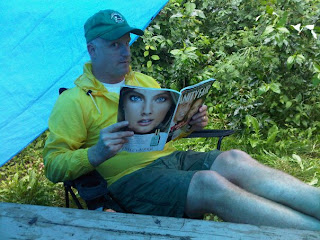 Trying to light a fire to cook dinner was interesting.  Heather brilliantly suggested that we back up the car to provide a tie-off location so we could extend the 30-foot tarp over top the fire pit.  Protected from the onslaught of water, the fire slowly found its legs and apart from being smothered in smoke, we managed to enjoy a satisfying meal of chipolte smokies.

To kill time and satisfy my urge to dip my rod in the water, if only for a few minutes, I suggested that we drive to the boat launch so I could fish off the dock.  We arrived around 8 pm and just 90 minutes later I had landed 10 pickerel and a couple of northern pike.

"This is like taking candy from a baby," I said to the pair fishing on the opposite dock.

That total might have been higher had I not lost a couple of big ones just a few feet away.  One particularly gargantuan pickerel robbed me of my rig, as its weight managed to snap the line.

In all my years of fishing, things had never been more productive or fun.  In short, I was in an earthly heaven, standing at the end of the Gregoire Lake Provincial Park boat dock, oblivious to the monsoon that continued with a fury.
Email Post