The Other Side of the River 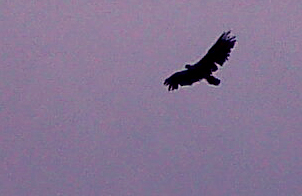 The little black dot emerged from the canvas of green that lines the other side of the Clearwater River, opposite our perch just to the right of the river's confluence with the Snye - the 300-yard stretch of now stagnant water that resides  between the lower townsite and MacDonald Island in downtown Fort McMurray.  The little dot became more of a smudge which rose up on its legs to become a sizable black animal.

"Look at the bear," shouted an angler, one of about 8 who were stacked up along the small stretch of land  on the north end of a spit of sand that is one of the most popular spots in town for sitting in your car and visiting, thinking and other things.

The one bear quickly became two, as the cub emerged from her shadow, bounding up the side of the small hill, likely darting for the patch of low-hanging berries, abundant at this time of year.

The distance between our fishing spot and the bears on the other side of the river is substantial, more than enough to provide a sense of safety, and awe at being able to witness many of nature's wonders right in the heart of the city. 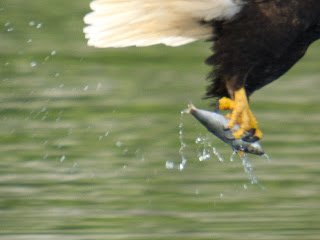 A little earlier, a massive eagle had swept by several times, talons stretched out, fishing for its supper.   Just 10 or 15 feet away, the bird did three large circles going from our spot on the shore, over to the MacDonald Island side, across to the north shore and back again.  Third time lucky, the eagle took his catch to a spot directly opposite the bunch of us, chowing down on the distant bank.

From a family of ducks drifting by to a huge heron gliding overhead, from majestic fish jumping out of the water to a lone beaver searching for their next piece of wood, we are blessed every day with the opportunity to see these wonderful animals in their natural environment.
Email Post