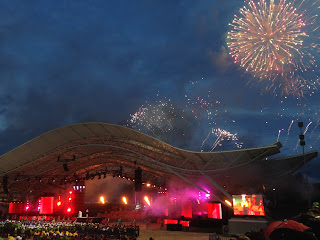 I am so glad that I was able to experience the Opening Ceremonies of the 2015 Western Canada Summer Games as a guest.  I was involved in the organization of the cultural component for a time, but felt the need to pull back early this year as there were too many other things going on in my personal and professional lives.  Being able to sit in Section M (on the south side of SMS Stadium) and just watch, I felt a delicious mix of anticipation, surprise, delight and intense pride in our region.

Here are a few of the highlights, in no particular order.

Heather had the brilliant idea of walking through Snye Park.  We had checked it out briefly the evening before - the beach volleyball venue is literally a one minute walk from our house on Demers.  The Snye is in absolutely beautiful condition with grass all along and a lovely four or five metre asphalt pathway (Morimoto Prominade I assume).  It was a delight to walk to MacDonald Island and walk home when the event was over.  Kudos to all the volunteers who helped shape the vision of this project, and to regional council for ensuring it was completed in time for the Games.  Talk about leaving an important legacy - Snye Park is absolutely one. 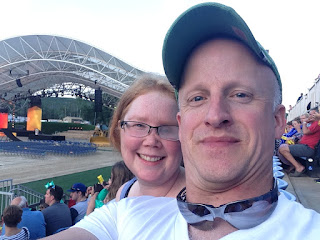 Sitting in our seats, not knowing exactly what was going to happen, we were filled with excitement.  "I heard there were 300 performers," said the guy to my left.  "I wonder if something is going to happen with helicopters," said another.  "They were buzzing around a lot today."  In other words, the organizers did a brilliant job of giving enough information out to generate a buzz and heighten the surprise,

Dan Gillies and Mate Cote played their screaming guitars on the big dozer that was parked on the stage while a team of stunt artists thrilled the crowd with their quads and motorcycles.  My heart was in my throat seeing these folks do jumps, flips and various other high-flying acrobatics.

I had tears in my eyes and the beat in my heart as Bill Bertschy led his large group of drummers to begin the ceremonies.  It was a collection of people from all part of the world tapping into rhythm of our Aboriginal peoples, and their long history in the region.  Powerful stuff.

5.  Entrance of the Teams 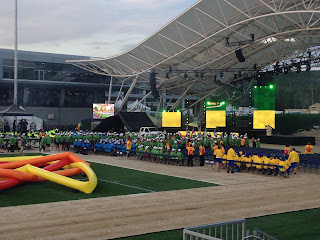 As the teams were announced and marched into the stadium, starting with BC, I found myself becoming very emotional.  My eyes were watery from beginning to end, particularly when my home province of Saskatchewan came in, resplendent with their bright green garb.  I recognize that these young people are what this major event is all about, and that it will be one of the life events that they will carry with them forever.  As several people at the podium had the teams cheer, stand and yell when their names were announced, it appeared to me that Team Yukon was the most boisterous.  How about you? 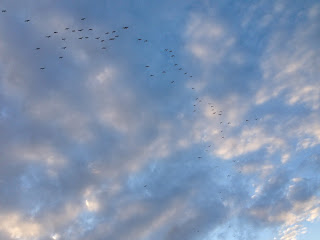 Twice at points in the ceremony that were exactly perfect hundreds of birds flew over Shell Place.  It was as if the producers them caged up on the roof and released them on cue.  Obviously, that was not the case, but they added to the magic of the event in a way that could not possibly be planned for. 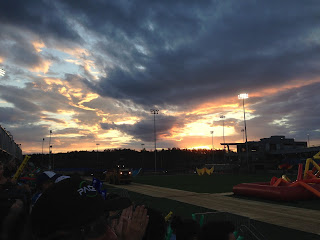 The stage and most of the activity was to my right, but my eyes kept getting drawn to the left, as Mother Nature dished up a heart-stopping sunset.  Again, you can never plan for these things, but when they happen it makes you think that something intensely special is happening.

One of the things about Fort McMurray that I am most grateful for is our diversity.  The line-up coming into SMS Stadium, the people in the stands, and the performers and athletes on the field reflected the multi-cultural reality of our community, region, province and country.  It was a beautiful thing to see. 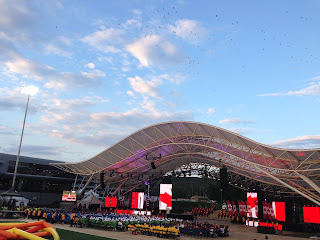 I got screwed up on the words as I was singing along (the choir was singing the bi-lingual version), but hearing "O Canada" and seeing the parachuters descending with their Canadian flag chutes was nothing short of amazing. 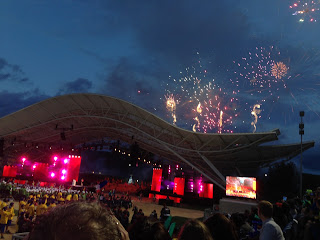 The emotional high point of the night for me was the explosive dance between Sarah Canning singing her brilliant Games theme song "Alive" and the fireworks show that was happening in the background.  Energy, enthusiasm and excitement rippled through the crowd.

"That was amazing", "Oh my goodness, that was fun", and "It blew me way" were just a few of the comments I heard as we made our was out.

Congratulations to the volunteer organizing committee, the professional team at Patrick Roberge Productions,  and all the people, performers and sponsors who made the Opening Ceremonies a remarkable experience.  Game on!
Email Post