I was into the final night of painting a portrait of Jon Wood, a beloved former football coach who died in 2011, when I made the decision to add his name to sleeve of his shirt.  Something was missing in the composition; there was too much shirt and not enough focus.  The name helped, but it still wasn't enough.

I was hearing silent whispers during this final phase of the portrait.  Four words kept repeating themselves, silent whispers from I don't know where:  son, brother, coach, friend.  Each word brought to mind the people who miss him terribly and the players he worked with over the years.  I added the four words on the shirt, just underneath of his name. 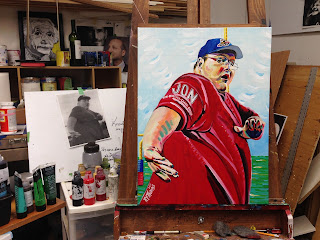 After I sent Melissa, his sister, a snapshot of the piece - she was thrilled with the result - I felt an overwhelming need to talk to her.  In that conversation, she shared with me a pretty big clue as to where the silent whispers may have been coming from. 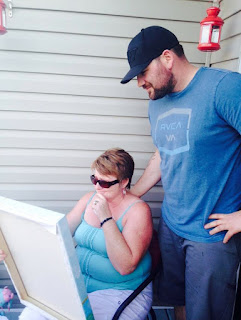 Listening to the silent whispers and taking action on what I'm hearing has profoundly shaped the course of this creative journey.

I had painted a portrait of actor Lorne Cardinal as a favour for Kelton Stepanowich who needed a few poster treatments for a film project called Gods Acre.  Mr. Cardinal had been very effusive about it on Twitter when I first shared it and I wanted to invite him over to the studio to see it in person.  He had a brief window of opportunity when he was in Fort McMurray filming in July, but unfortunately, that was the day we were leaving for our family reunion trip to the Kootenays.  My intentionwas to give him the painting when he came for the visit.  So, I gave it to him anyway, opting instead to mail it to his home north of Vancouver.

He posted this marvellous set of images on Twitter yesterday. 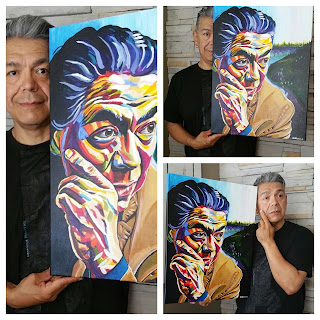 While watching BASEBALL by Ken Burns, the seminal mini-series about the history of the game, a silent whisper said that I had to paint Ty Cobb. 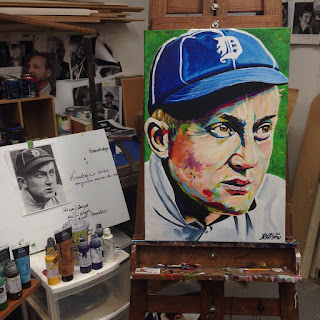 Shortly after posting it on Instagram,  I got a lovely message:

She then asked if she could purchase it.  Sadly, I had to let her know that it was already spoken for.

Maybe it's because I'm getting older and that I've had issues with my hearing in the past, but I've become a very good listener, even of messages unspoken.  Where these silent prompts take me is really quite remarkable.