I am shocked by the proliferation of paint nights in the last year.  Every time I open my Facebook I see that some local bar has hosted large groups of people who sit in front of easels and put colour on canvases.  One person suggested recently that paint nights have helped to prop up more than several watering holes during this soft economy.  Who could have ever guessed that this particular fusion of art, entertainment and social engagement would take off in this crazy way?

I often start my own workshops by stating very clearly that they will be nothing like "Paint Nite".  I did the same thing last night when I hosted my first paint date in Birdsong Studio.  Stefan had reached out to me to ask if I would consider doing such a thing.

I had no commitments in my social calendar; Heather was out of town doing a conference; I was game to try something new - a workshop with only two participants.

Stephanie had no idea what Stefan was up to.  She knew they were doing something different, but she had no idea what it was going to be.  Meanwhile, Stefan had dropped off some beautiful flowers earlier in the day to add some additional class and surprise to the adventure. 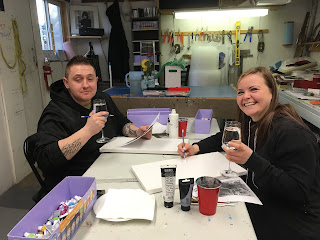 The night's subject was chosen by a Stefan: a single long stemmed rose made famous by the movie Beauty and the Beast.  Stephanie is a big fan of the 1991 animated version.

"This is a little out of my own comfort zone," I shared at the beginning of the paint date.  I don't often paint flowers.

"We're going to discover how to make this happen together."  And we did.

As the paintings were getting close to being done, the studio serenely quiet as all three of us were focused on putting in the final details, I asked: "What one word best describes this experience?"

More silence followed as they painted and thought. 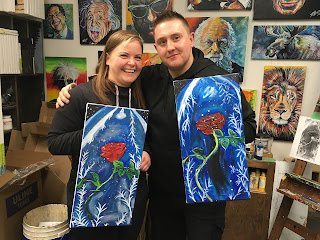 If you are interest in arranging a one-of-a-kind intimate and inspirational paint date in Birdsong Studio, send me an email (russell.thomas@birdsongconnections.com).