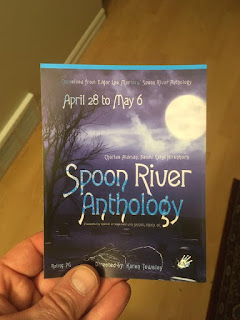 There are many plays that take you on a predictable and easy to follow journey through a story.  Dialogue, circumstance, action and plot all come into play and you leave the theatre being able to recount, with a certain amount of detail, what happened to who and why.  Leaving Spoon River Anthology, the final production in Keyano's 4-play subscription season, I couldn't do any of that.  However, the play and its many characters that emerged from the hereafter to share their connection to Spoon River, offer a different kind of theatre experience.

Someone on social media said that once they allowed the play to "wash over them", they were able to connect more deeply.  They were right.  Trying to intellectualize how one character connects to another is going to be an exercise in futility.  That person's advice to just absorb and embrace what you see is a far better approach.

This production of Spoon River Anthology, directed by the incredible Karen Towsley, stretched the audience and stretched the actors.  I have seen Norm Sutton perform in multiple productions over the years, but none of them compare to what I saw last night.  He was captivating in all of his roles - I lost count how many characters he portrayed - and he was absolutely believable.  He owned the stage, yet stayed connected to those around him at the same time.

That sense of unity and connection could be said for the entire ensemble.  Characters stepped into and out of the light but were never alone or apart; they were among a community of people.  They moved around the stage like the pulsing of a single beating heart.

I am sitting here hesitating to single out performers.  I don't have a playbill in front of me and that means I'm left to rely on my limited knowledge of who was who.  That said, I will do my best.

I can't forget the incredible work of Brittany Sutherland.  Seeing her on the stage was such a wonderful thing - she shines.  Dave Martin is entrancing, especially in those moments when he came downstage to share one of his characters.  He has a physicality that was both surprising and effective.  Hanna Fridhed continues to amaze me.  Her growth as a performer, through hard work and unflinching commitment, is undeniable.  I was so pleased to see Sheri Reed back on the stage.  In only her second production, she soared as she transitioned from one character to the next.  Bailey Yarkie was equally impressive, making her moments matter and staying connected to the heartbeat of the play.  Young Suzanne Quick demonstrated the voice of an angel and a stage maturity that belies her years.  In talking to her at an event a number of months ago, before the start of rehearsals, she told me that her dream is to pursue a career in theatre.  That dream makes a whole lot of sense after seeing her work last night.  Diana Moser once again delivered a strong performance.  She also contributed an additional skill to the show that was so incredibly powerful.

I've left Dylan and Ben to the very end, as I don't know how to say what I want to say.  First of all, saying that I am proud seems inadequate.  I feel an overwhelming sense of awe as to what they have accomplished.  They both have a dedication to the process of making theatre that is inspiring.  I sense it from home and I hear it from people around them.  They have also grown into two very distinct performers.

Dylan uses everything that God gave him to full advantage.  He climbs on slanted coffins, delivers intense monologues at the downstage edge of the stage, and moves his body from place to place with full commitment and trust.  He draws from his deep well of emotions and memory to deliver powerful monologues.  Dylan has grown into such a strong actor and it was lovely to watch him stretch his range in Spoon River Anthology.  He created some beautiful moments and generated a few laughs, too.

It is hard to reconcile the fact that Ben delivered the level of performance that we saw last night with the fact that he is only 13 years old.  It makes no sense.  How did that happen?   First of all, Ben has a work ethic that is beyond his years.  He has also been surrounded by so many supportive performers and talented directors.  I saw an evolution in his performance ability that is nothing short of stunning.

Not enough can be said for the director's role in taking this ensemble on this journey.  Karen Towsley has a wonderful gift; this cast and this community were the beneficiaries.  We are so grateful.

If you haven't seen Spoon River Anthology yet, be sure to go in with an open mind and heart.  Allow the experience to wash over you and let it seep into your bones.  It is still seeping into mine, as I know it will for quite some time.
Email Post