The great anticipation for Spoon River

I don't recall a time when I was as excited about seeing a Keyano Theatre Company show.  Spoon River Anthology, directed by Karen Towsley, feels like it is going to be something special and unique.

In contrast, we pretty much knew the storyline of Footloose, the musical that drew in huge audiences back in February.  Before that, The Other Side of the Pole offered a recognizable and familiar holiday themed evening of theatre.  Spoon River Anthology is an enigma, a riddle, an oasis of no-idea-what-to-expect. 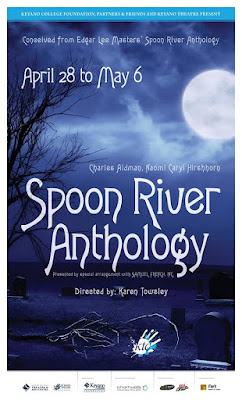 Both of our sons, Dylan and Ben, are in the cast.  They have talked about the experience and the structure of the show, but beyond that, we are as in the dark as audience members who have no connection to the production.

As a parent, there is additional anticipation because the play has been a stretch for both boys.  On the one hand, Dylan, 18, has nine different monologues.  I got the sense that the work of doing this show was expanding his skills and abilities.  He worked hard and often came home exhausted.  This was an essential precursor to what a life in theatre will be like. I can't wait to see the fruits of his labour and the connection he has made to the characters, story and the ensemble.

Something happened with Ben since the fire.  All of a sudden, he started playing guitar every day.  Over the last year, he has dabbled with jazz and the blues, figured out complex cords and scales, and provided a nightly soundtrack that both Heather and I get to enjoy.  Spoon River Anthology will be our first chance to see him play; he usually practices behind his closed bedroom door.

This will be the second time that the brothers have performed together in a Keyano Theatre Company production, the first being Les Mis.  Ben last appeared in A Christmas Carol as the Ghost of Christmas Past.  Dylan, as mentioned earlier, was in the most recent production of Footloose. 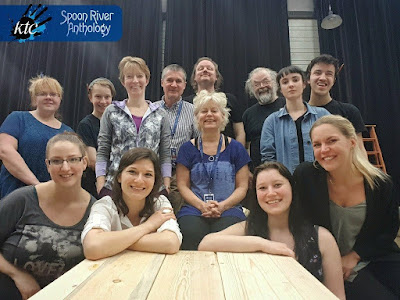 The other thing that is fuelling my anticipation of Spoon River Anthology is how other members of the ensemble talk and write about it.  I asked Diana Moser about the show the other day and she lit up.  Hanna, my colleague at United Way, has nothing but glowing things to say about the experience.

"Who has surprised you the most?" I asked Dylan and Ben over dinner the other night.  They both reflected on the question and both came up with the same answer, an ensemble member who seems to get stronger and more confident with each passing day. I won't mention his or her name, instead, leave you to discover the answer for yourself.

It is impossible to articulate the value of being a part of an experience like what Spoon River Anthology has offered.  Heather and I are proud to be Theatre Angels because each production is an opportunity for personal and artistic growth for everyone involved.  The fact that our boys get to be a part of it, is icing on the cake.

This is the first time, coming into a production, that I'm planning on attending twice.  Unfortunately, I can't be there for opening night because I'll be travelling back from a live painting gig in Edmonton.  We've switched our tickets to Saturday.  We'll also see it with Dylan and Ben's grandparents next Friday.  The anticipation that I am feeling is palpable.

Our deepest thanks to Karen for her leadership and mentorship.  Also, thanks to Alan Roberts for having the courage to add a lesser known work to the season.  We really appreciate and value the variety.
Email Post