On the farm back in Saskatchewan, there were a number of buildings on the home quarter, among them was the blacksmith shop. It was a mighty mess of old engine and farm machinery parts, anvils, grinders, bolts and assorted odds and ends from a century of farming.  This was previously my grandfather's farm, taken over by my uncle, and eventually, his son, my cousin.  In our family, it was simply "the farm".

Attached to the blacksmith shop was a lean-to machine shed, a place to get the discus or swather out of the weather. It was open to the elements, but offered enough weather protection to make a reasonable difference to whatever was under its roof.  Deep inside and under the rafters were large nails, holding forgotten bits of life, objects that had been there for so many decades that they seemed to have blended into the background.  A pair of rusty old skates was among them. 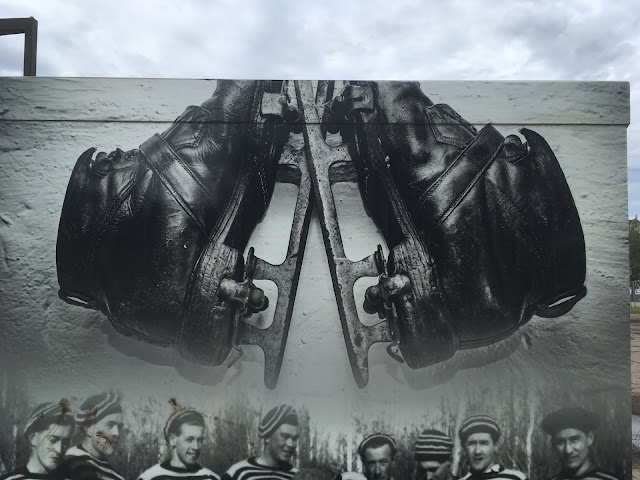 Heather and I have been walking to our neighbourhood Starbucks to grab a coffee on an almost daily basis.  As soon as we cross Franklin Avenue, we pass by a power box that has been wrapped with historical images.  Very much hockey themed, this particular collection of images includes a pair of old skates.  Every time I saw them, I instantly thought of the farm, and that cobweb adorned pair of rusted blades sitting in the rafters.  I also they would make a great painting. 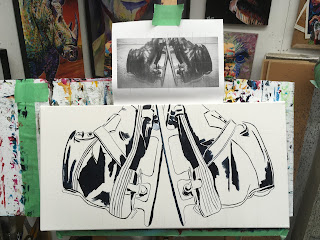 I sketched them out on Canada Day and roughed in some of the dark areas.  I went out to the studio early this morning to start adding colour. 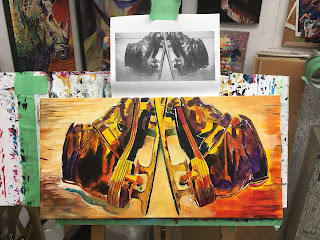 Every painting is a journey with no pre-ordained destination.  Colours get mixed, layered, darkened and lightened until the painting comes together in a way that makes sense. 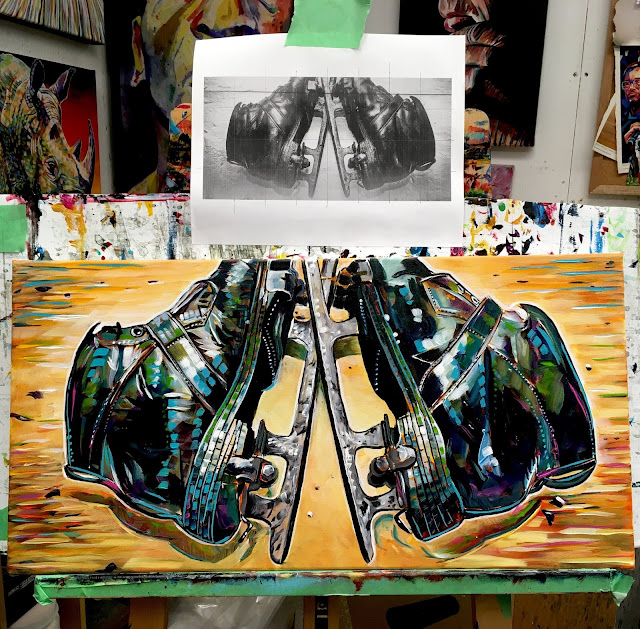 My father grew up in the 1940s, on a farm a long horse drawn wagon ride from the nearest town.  He and his two brothers and one sister had to find ways to keep themselves entertained.  Skates played a key role in doing that during the winter.  Snow was pushed aside on the small slough, and the hours were filled with good old fashioned pond hockey.  Or, at least that's what I imagine.  It gives me something to ask Dad about the next time we chat.
Email Post