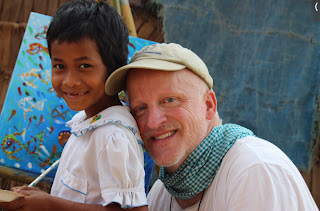 As the year broke, and word started to come out of China of the novel Coronavirus, I started second-guessing my plan to travel to Southeast Asia at the end of January.  I even got to the point where the Expedia agent was ready, willing and able to refund all my money, no questions asked.  “If it was me, there is no way I’d be travelling to Asia right now,” she said.  Despite that strong foreshadowing of what was to come, we decided to throw caution to the wind and travel anyway.

I tried to buy masks at that time, long before they became a staple of every store and market under the sun.  There was none, absolutely none in the province.  Someone at Costco suggested that they were being bought up and sent overseas to family members in China.

By the time I made it home from our trip to Cambodia, cases in the United States and Canada were only starting up in small numbers.  It was only a matter of days before panic buying began along with toilet paper disappearing from store shelves and rumours of potential lockdowns as scenes from Italy and their outbreak were dominating the collective psyche.

When the WHO finally moved from the term epidemic to pandemic, everything changed on a dime.  Sport seasons were cancelled, Las Vegas and Disneyland closed, and normally busy city streets became deathly silent.  It was an “unprecedented” time that none of us will forget. That word - unprecedented - became commonplace in describing the events of the months that followed.

I remember seeing our neighbour Murray a few days into the lockdown.  It was incredibly reassuring to see another human being.  Another neighbour insisted that she needed company and invited us over for dinner.

Time has marched along and these “unprecedented” times have transitioned to feeling rather normal. I’m sitting at a table in a coffee shop attached to the hotel we are staying at in Banff.  A plexiglass sheet has been attached to the table, separating me from the table four feet away.  I don’t feel odd about it in the least.  It feels like the new normal, and I almost don’t give it a second thought.

For the longest time, I was reticent about wearing masks.  Through the summer, the only place I wore one was in Costco or at the grocery store.  Now I wear them everywhere.  They have become an essential accessory, like mitts or a toque.

The question I keep asking is whether - at the end of all this, when the vaccines have been deployed to the masses - the plexiglass dividers will come down and the masks thrown into the dustbin of history.  Or, will this temporary new normal became the permanent normal?  Will fears of other pandemics change our thoughts and behaviours around social distancing.  To be frank, there are some things about this situation that I really like.  I much prefer having lots of space around me when standing in a line at the post office.  I also enjoy the sound insulation provided by these plexiglass dividers in restaurants.  Heather and I were sitting next to a couple at last night’s dinner and it felt like we were in the Cone of Silence employed by Maxwell Smart (a super agent character from a sitcom called “Get Smart” from the 1960s for the younger readers).

I’ve also enjoyed watching people pivot to better things.  The pandemic provided the impetus for millions to shift and adjust toward dreams and aspirations that had eluded them previously.  While this time has been unquestionably hard for millions - especially those who have been sick, lost loved ones, lost incomes - for millions of others it has inspired positive change.

I fear the weeks to come might be the hardest of all in this pandemic. Despite the great news of vaccines coming up almost daily, Covid infections along with hospitalizations are spiking across the world.  In Canada and the United States, family Christmas celebrations might be a pipe dream as restrictions and lockdowns might need to be intensified.

My only advice would be to roll with it.  Mother Nature is going to do what she is going to do and forced isolation and stillness can be good for the soul, if you allow it to be so.  My fear is that the more resistance you feel to it all, the more damage it will do in the long run.  Stay strong.  Stay nimble.  Stay open.  Most importantly, stay well and safe.