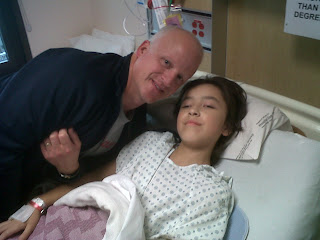 In the middle of the night the Stollery is quiet. All I can hear is the hum of the air exchange system and the drip of the IV. The air in Dylan's room is crisp, cool; staying warm requires hiking the blanket right up to my chin and wrapping it around my fists. His monitor and PCA chirp and beep sporadically throughout the night, sometimes incessantly, until the nurse catches on that something needs to be checked and fixed. We both wake up, Dylan grumbles about the machines, and slips back into his slumber as soon as the noise stops; I follow closely behind.

This has been a rather solitudinous experience compared to last time when we were in a shared space, with patients and families rotating in and out every couple of days. A room of our own provides minimal distraction and human interaction. We've exchanged a view of the great outdoors and roommates for a view of the great atrium and privacy.

Time deprivation is hugely in play in this spot. The ambient light provided by the atrium casts an androgynous glow that masks all sense of the hour. Jumping out of a deep sleep, I would be completely lost if not for the clock on the wall above the sink.

The pain docs have been trying to find the right mix of drugs to eliminate the regular pain episodes that Dylan had been experiencing. If last night is the measure, then they have achieved success. Outside of his stomach being a little agitated by having to swallow a bunch of pills, the night was absent of any searing pain.

Amanda was his night shift nurse. As I type, she'll be getting ready to tag out and head home for some sleep. She is a larger lady, with a small streak of blue in her hair, and a tremendous bedside manner that makes it easy for Dylan to get roused every two hours for his medication and the requisite tests and checks. The balance she achieves between encouragement and insistence is excellent.

All the nurses have their unique characteristics, qualities that set them apart from each other. The difference in the docs is even more striking. I had a few words with Dr. Dulai about the resident who participated in the surgery and has popped by on several occasions.

"He has the bedside manner of a prune," I said.
She laughed.

"Sometimes these students get so wrapped up in the science that they forget about the people," she started. "It's important for us to get feedback like this, otherwise there would be no way for us to know."

"I think I got the resident in trouble," I whispered to Dylan.

Dylan is halfway through his stay at the Stollery Children's Hospital, resting comfortably, watching some TV when the drugs wear off enough to leave him lucid, and visiting with the few of us who take turns being the resident "parent". Heather and I have covered most of the shifts with Grandpa Joe spelling both of us off from time to time. Nadia has been fighting a flu since she arrived in the big city and has stayed away, not wanting to share her germs with the patient (and patients).

It is 7 am. Dylan is wrapped up, leaning to the left of his bed, watching Spongebob Squarepants on the little extendaTV that stretches out from the wall to a spot 18 inches in front of his face. I'm going to get dress and duck down the back staircase to grab a coffee. The elevators are not fast enough for me, and God knows I need all the exercise I can get.
~about an hour later~
All Dylan knew is that they wanted to roll him on his side and that it would hurt. He didn't know they were going to insert a suppository. The scene provided a welcome moment of levity for everyone.

The team of three began carefully rolling him onto his side to expose his oblivious behind.

Everyone erupted in laughter. As always, Dylan's comic timing was perfect.