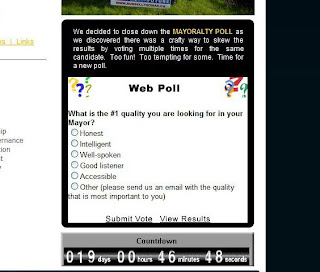 I've learned a lot about driving traffic to my website in recent weeks. Using very basic web analytics, I can clearly see what attracts attention (visits) and what does not. Last night, I peaked in terms of daily traffic when I posted a very unscientific and anonymous poll asking "Who are you most likely to support for Mayor on Election Day?"
Of course, had I just displayed the poll on www.russellthomas.ca, nobody would have known it was there unless they happened to pop in for a visit. So, I announced the poll in my Facebook status and provided a link then tweeted about it on Twitter. Response was instant with Mayor Blake taking a commanding lead in the first five minutes.
I was very careful to note that the poll had absolutely no scientific verifiability; it was just for fun. The simplistic interface that I use allowed me to limit the number of times a person could vote to once per computer. I thought it was fail safe. It was not. Somebody figured out, after a couple of hours, that if they cleared their history they could return to the sight and vote again and again, making it appear that their candidate was more popular than they actually were. With this discovery, and with the realization that campaigns could shape the results of the poll, I felt the best move was to remove the temptation.
It was fun while it lasted. Three things are clear to me: 1) the majority of the people in my social media universe appear more likely to support Melissa Blake (as of today), 2) it is definitely a two-person race, and 3) having an interactive component on my website increases visits dramatically.
I am a marketing and communications professional, but each day of this campaign I'm learning new things and seeing great ideas all around me. Ross Jacobs (www.rossjacobs.ca) announced that his campaign would provide rides to and from the polls on Election Day and during the advance polls. A bold move, the offer aligns perfectly with one of the pillars of his campaign, which is increasing the voter turnout. Sheldon German (www.sheldongermain.com) was running around our neighborhood before supper last night, dashing from house to house in between intermittent showers and hail, saying hello and dropping off his flyer. I'd been told by several Councillors that Sheldon campaigns harder than anyone; I completely believe it.
I've purposely share lots of information about the election on my website, providing links to the other campaigns and some of the press that has occurred in print these past several weeks. One person on Twitter commented that he or she appreciates the work that has gone into that and returns quite regularly to see what is new. I try.
I got up in the middle of the night to change out the poll, having realized that visitors may have figured out a work-around to the one vote per computer thing. As luck would have it, our Internet connection was out for maintenance, so I returned to bed content in the understanding that the poll would have to wait until morning.
September 29, 2010 - 198 pounds, 35.3% body fat
Email Post