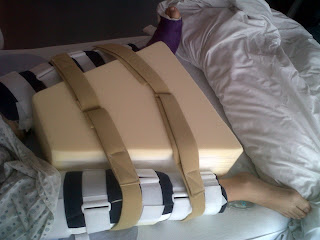 The 90 year old couple in the elevator loved the suppository story this morning. They had a nice laugh, a rare treat for a ride in the usually quiet and impersonal elevator.

I was feeling a little out of place today, not having to take over at Dylan's bedside. His mom insisted on staying with him, even after having done the night shift.

I'm here now, on the bed next to the window overlooking the Stollery atrium as Dylan watches some TV. Nadia has gone to shower and get refreshed at her Auntie Doris's house just a few blocks away.

Writing on a BlackBerry is way different than on the laptop. My thumbs get quite a workout dancing from key to key. I've become used to this keyboard over time. I keep thinking how nice it would be to have an iPad for circumstances like this, when I have no WiFi signal and plenty of time on my hands. While the BlackBerry provides access to the Internet, it's slow and clunky. Maybe I ought to take a trip to the Apple store?

I guess another option would be to get one of those Internet sticks. Is that what they are called? I just wouldn't want to pay for something that I would only need from time to time. As George Carlin used to say: "It's a mystery!"

As it is hard to picture what Dylan is going through, I thought that sharing his leg splint situation might help. He has a cast on the lower half of his left leg, where they did some reconstruction work on his foot. Over top of that he has a Zimmer splint, to ensure that his leg stays perfectly straight. He has an incision on that leg, on the side near the top of the femur, where they cut and realigned the bone and attached a metal plate.

He also has a Zimmer splint on the right leg where they did some additional work, transferring some ligaments and taking out the plate on his femur that was put in two years ago. He also has a large dressing on his hip where they took some bone grafts for the foot reconstruction.

Between his legs he is sporting a custom-made wedge, designed to keep his legs spread about 45-degrees for the first couple of weeks post-surgery. The wedge actually helps when it comes time to turning him on his side or transfering him to his reclined wheelchair. They also have two gel packs under his heels to prevent bed sores.

So, this is Dylan's limited world for the next many days. Eventually, the physiotherapists at the Glenrose will begin the slow and steady process of getting him weight-bearing and eventually, vertical.

A lot has been said and suggested about our health care system in Alberta. But our experience has been outstanding. The nurses and doctors are wonderful, committed, generous and empathetic. The facilities are first-rate and welcoming. We expect the same and more from the Glenrose starting on Monday.

We live in a place of gratefulness for all the blessings that have been heaped upon us and our son. Whether a kind word on Facebook, a silent prayer from far away, or an in person visit, every positive intention gets our attention and our profound gratitude.
Email Post