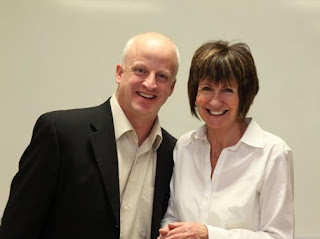 Sally-Ann King accepted the award on behalf of her students at the official ceremony held at MacDonald Island on January 20th. Had she known that an award was coming her way she may not have shown up. But the fact that the honour was also directed at the Transitional students, she acquiesced and graciously accepted the 2010 Environmental Achievement Civic Award. She is an incredibly humble soul not interested in the limelight.
My job today was to don my Councillor and College hats and present each of her students with certificates. I had a sense from the outset that my visit was going to be special, and I was right. As they arrived in the classroom to get ready for the presentation they were donning incredible smiles and dripping with anticipation.
I said a few words in my capacity as Acting Mayor, acknowledging the great work they do to help minimize the impact on the environment through their recycling efforts at the College. They listening intently as I shared the fact that Mayor Melissa Blake would love to have been there, but that she was traveling to a conference.
"The Mayor sent me an email early this morning," I said. "She wanted me to tell you how proud she is of all of you for winning this incredible award and for everything you do every day to help our community."
Their faces beamed with pride as our photographer, Sean McLennan, snapped pictures of them receiving their regal certificates: Hamdi Abdulahi, Justin Adey, Noreen Dang, Sean Foxe, Jacob Walker, Russell Smith, Chantille Rose, Kristina Osment, Dale Bauld, and Valerie Freeman. 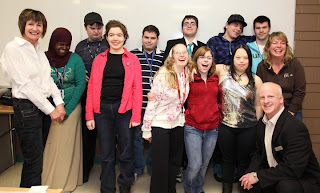 The group photo really tells the story, faces full of joy, of total delight.
We sat around enjoying coffee and cake, spending quality time getting to know one another.
"I want to be florist," said one of the girls. "I want to study how to arrange flowers. I love flowers." 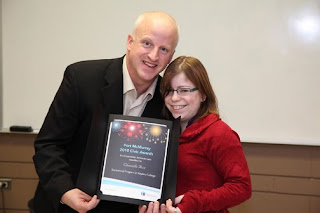 "I love to perform," said another. "I love to dance. I love to sing. I love drama. I take it very seriously," she said with an intent smile. "I volunteer at the theatre." 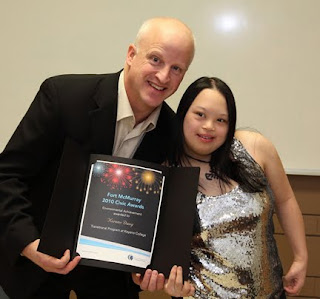 Russell (the other one), who is often seen in the corridors of the College wearing his standard blue smock collecting cans and bottles, dressed up in a suit and tie for the occasion. He burst into the Executive Office later in the afternoon, chest pushed out forward. 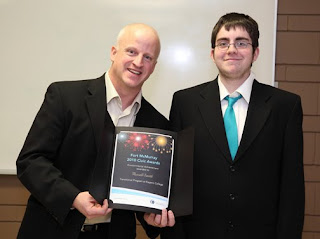 "I got a certificate," he said. "And I got it from Russell Thomas who is Acting Mayor because the real Mayor couldn't be here." The ladies in the office said he was over the moon.
They each have a different story. Some have landed in Fort McMurray from spots across the country, from Campbell River to Toronto, while others came from farther away. One came from across the big ocean and the country of Somalia. There were several who were born and raised right here in Fort McMurray. But they all have several things in common including an inspiring zest for life, and a love and respect for each other.
They are the Keyano College Transitional students, and they are winners, each and every one. 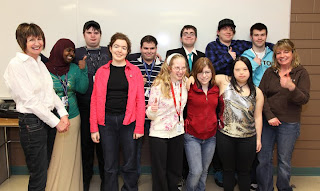