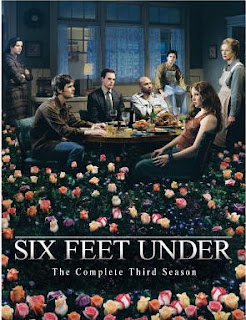 We had heard whispers and the odd shout about Six Feet Under, the HBO series that ran from 2001 to 2005, especially from Kenny and Erin who were vocal fans of the show. Then we got into a conversation about our favourite shows with Will and Gaylene who lit up as they told us about Six Feet Under.
"Have you seen it?" asked Gaylene.
"No, we haven't yet," said Heather.
"Oh my God," she said. "Wait right here."
She ran down to her DVD library and pulled the discs for Season One and giddily handed them over. "Here you go. That'll get you started."
Get started we did, diving into the series like a pair of intrepid explorers. At first, we were a little uncertain about the darkness and starkness of the show. But in short order the characters seeped into our pores: Rico, Keith, David, Claire, Ruth, Nate, Nathaniel, and Brenda. 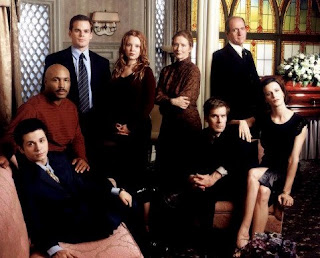 Seeing the number of shows remaining in Season One dwindling fast I did a quick sweep of the local stores to see if I could snag the next. No luck. So, to Amazon website I went and ordered all the remaining series, hoping that Season Two would arrive in time for the Christmas holidays.
Over the past couple of weeks we have plowed through the 24 episodes of Seasons Two and Three. More often than not, at the end of the show when the screen floods with light and the credits begin, Heather can be heard uttering "Oh?", disappointed that the end has arrived and completely hooked for what's coming next.
"Give them a reason to come back," we used to always say in the radio business. Give them a piece of what's coming next to compel them to tune in at a particular time or to hang around till after the commercial break. Six Feet Under achieves this objective every episode, adding new wrinkles to the storyline or new tangents in the character arcs in a way that leaves us thirsting for more.
Unlike Mad Men, set in a completely different place and time, or The West Wing, set in the unreachable environs of the White House, Six Feet Under is set within a family funeral home, a small business that is strangely familiar. As family members drift apart or find comfort in each other, your heart cannot help but ache and soar with the cadence of the story. Last week, at the conclusion of Season Two, it was the uncertainty of brain surgery that left us unsettled. This week, as Season Three came to a close, it was the anger and futility of unexpected loss that carried the day.
I write in generalities, respecting the fact that you might not have seen the series yet, not wanting to give anything away. I hope you will forgive me. Seasons Four and Five sit on top of the television waiting to be opened and enjoyed. We can't wait.
Email Post