I just wanted to come home 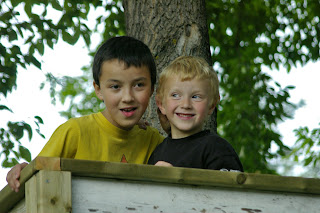 My son Ben wakes up in the morning, wraps himself up in the soft green blanket that we had bought for the return trip from Vancouver on the VIA Canadian last summer, wanders into my study which is right beside his bedroom and gets his hug. The other morning seemed like all the others that came before, until...
I had decided to make French toast, to shake things up for breakfast. Ben sat down and all of a sudden was staring blankly across the table. At first I thought he was mad at his brother Dylan who happened to be sitting in the spot where he looking. But then I realized he was looking through Dylan.
"What's wrong Ben?" I asked.
He began tearing up and slumped to the floor. As I bent down and gathered him in my arms he whispered something indecipherable and the tears began cascading across his cheeks. It was only when Dylan and Heather left the table that he opened up.
"OK, I'll tell you what happened in my dream."
Ben is like his mother, he can recall intimate details of both plot and character from his dreams, hours after waking. Me, on the other hand, I lose everything the second minute that I'm up.
He began recounting a terrible tale of being taken to another province, away from his family, surrounded by angry arguing people. It was awful.
"I just wanted to come HOME," he desperately said at the end of his story. But, it was the way he said it that made us feel so good. (by this time, Heather had returned to the table to listen)
"I just wanted to come HOME," resonated through my head the rest of the day. It was a powerful statement that reinforced the fact that we have successfully made a home for our boys that feels like the safest, most comfortable place on earth. While we feel that way as adults, it feels incredibly reassuring that our children feel the same way, too.
January 15, 2011 - 201.8 pounds, 27.2% body fat
Email Post