The Point of Diminishing Returns 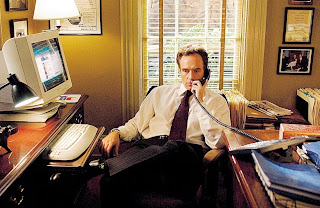 There is a great episode in The West Wing when Josh Lyman, Deputy Chief of Staff for the White House, happens upon some particularly inflammatory comments about their governance performance in an online discussion. Against the better advice of his Executive Assistant, Donna Moss, he decides to step up to the plate and begins to defend the administration. The moment he typed a single word he had reached the point of diminishing returns. In other words, he was sunk even before he set sail.
I've been thinking of this scene for the past couple of days as the smoke settles on the devastating explosion and subsequent injuries at the Canadian Natural Resources Limited Horizon oil sands site. A seemingly innocuous video was uploaded to YouTube by an employee of the company while situated just outside the fenced off compound of the mega-project located north of the hamlet of Fort MacKay in the Regional Municipality of Wood Buffalo. It has attracted over 75,000 views in just three days and a slurry of comments that have likely shortened the sleep of more than one public relations official at the company and throughout the oil sands industry.
What is startling to me is how this relatively benign 18 seconds of video content has inspired this much attention in such a short period of time. What's even more disturbing are the hundreds and hundreds of comments that have been posted, complete with seditious accusations, conclusions and assumptions, peppered with disturbing expletives and a barrage of personal attacks hurled from the safe position of online anonymity.
I'm sure that my communications colleagues watching this uncontrollable public relations nightmare play out are frustrated, likely feeling somewhat powerless, and definitely realizing that the global reputation of oil sands has taken yet another significant hit.
My thoughts and prayers go out to the poor souls who were hurt in this incident, and those who are suffering through the after shocks of an unsettling experience. A lot of people work in industrial settings where things can and do go wrong, not just in the oil sands but around the world. An explosion like this reminds us all that there is an inherent level of risk, regardless of safety protocols, checks and balances.
Meanwhile, the online discourse and deconstruction of the sad events of January 6, 2011 continues. The question of reputation will undoubtedly be front and centre during the Community Image Summit coming up later this month. Communication practitioners from all sectors will gather for an afternoon and evening to talk about the challenge of achieving a better level of global understanding about Fort McMurray, Wood Buffalo and oil sands. This is a great place to live and raise a family. But one explosion, several injuries and over 75,000 views can distract from the reality of our community and region that in my view is irrefutable.
Email Post