We arrived at the Suncor Community Leisure Centre just before 12 noon, the appointed time for the final visit of the 2015 Western Canada Summer Games selection committee.  Dylan, Ben and I walked into the building, a little unsure how to proceed as the cavernous entrance hallway was lined with people cheering and banging thundersticks.

This energy creating strategy was employed during the original pep rally that had wowed the judges in a way that left most everybody involved thinking we had the Games in the bag.

Broad smiles crept across the faces of my sons as they joined me on the jaunt down the invisible red carpet to the end of the gauntlet where I could see my Council colleague Jane Stroud.  It truly felt like we were celebrities arriving for an awards show.  Councillors Mike Allen and Don Scott had a similar experience when they arrived a few moments later.

"They are leaving the KISS stage and will be here in two minutes," announced emcee Ross Jacobs, as the crowd erupted. 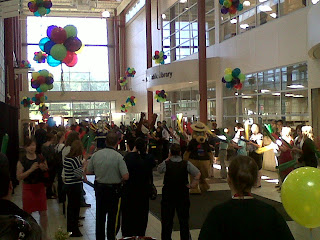 The volume reached a pinnacle as the colour guard penetrated the crowd and led the honoured guests through the spirited collection of Games supporters who had ducked out of work and school to deliver a final and resounding message that we really, really, really wanted the Games.

Minister Cindy Ady took the podium and expressed her awe at the welcome.

"We had five incredibly strong bids for these Games," she said.  "But I'm proud to announce that the 2015 Western Canada Summer Games will be held right here..."

Photo by Myra Ross, RMWB
Hundreds of guests rose to their feet in celebration as a cluster of helium-filled balloons were released.  Minister Ady craned her neck upwards, draped in an incredible smile, watching the colours of the Games sail to the top of the atrium as supporters cheered  hysterically. 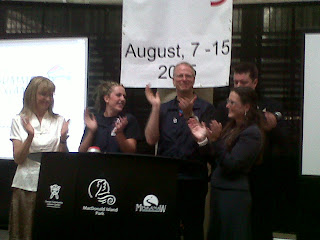 Minister Cindy Ady, Co-Chair Kassie Singer, Co-Chair Jeff Fitzner, Mayor Melissa Blake, and Emcee Ross Jacobs
Off to my left, lead co-organizer Sally Lockhart was sobbing in jubilant satisfaction while her partner Monica Lance wiped away the tears.  Bid committee co-chairs Jeff Fitzner and Cassie Singer were beaming as they accepted congratulations and fielded an onslaught of media questions.  Mayor Melissa Blake was as happy as I've ever seen her, soaking in the incredible opportunity we've earned to host over 4,000 athletes from across Western Canada.

Dylan will be 16 years old when the Games arrive in 2015; Ben will be 12.  I was so pleased that they were able to be there to experience the birth of an event that will become a significant piece of Wood Buffalo history four years from now.  Games on!
Email Post
Labels: 2015 Western Canada Summer Games Cindy Ady Don Scott Games Jeff Fitzner Kassie Singer Melissa Blake Mike Allen Regional Municipality of Wood Buffalo Ross Jacobs