My Story of Stuff 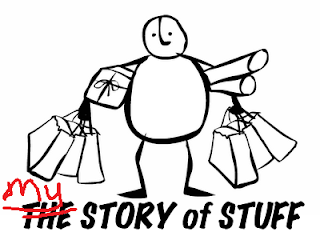 My family is getting ready for a garage sale on Saturday morning.  Stuff is coming out of the woodwork and finding its way on to the rapidly growing pile in the garage, ready to entice early morning collectors and shoppers.

I have a long shelf full of records.  A bunch of them came from a garage sale that Heather went to in Anzac almost 10 years ago.  Some are part of my precious Bob Dylan collection.  Others have never been opened.  They sit there gathering dust; I don't even have a working turntable to play them on anymore - yet I resist the rational course which would be to lug them up the stairs, out the door, and on to the pile.

We have books in every nook and cranny - novels, plays, non-fiction and everything in between - upstairs, downstairs, from the bedrooms to the bathrooms.  Some I'm completely comfortable putting on the sale table,  trashy crime novels and the like, ones I'm likely never to reread.  But, the vast majority are treasured books, ones that I can picture returning to at a moment yet to be determined.

The boys perceive the garage sale as an opportunity to turn a profit.  Heather and I will be thrilled to give the stuff a new home and avoid the landfill, regardless of how much money we make.  Priorities change with age.

"Why don't we sell these?" asked Ben, looking at the long row of yellow-spined glories.

"No way," I snapped, insistent that the colour yellow is off limits, images of the Kamsack Library popping into my head that boasted an impressive collection of National Geographic magazines going back almost 100 years.  There was a sense of majesty in that for me; there still is.

From DVDs to CDs to miscellaneous this, that and the other thing, I am comforted by stuff.  I'm almost embarrassed to admit it.  But, I love having all these little distractions, little packets of forgotten treasures and memories.

My story of stuff will end many years from now, when I reach that point of enlightenment, when the stuff becomes superfluous. For now, I hold on to the stuff that matters, pass along the stuff that doesn't, and revel in the empty spaces we've created, making way for the stuff that will surely come tomorrow.
Email Post