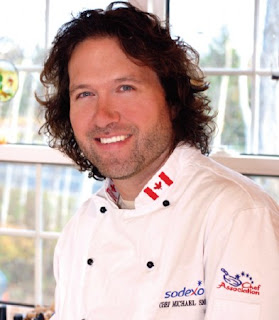 Chef Michael Smith is mountainous, tall, with a shock of hair that helps him seem even larger.  Standing next to Country 93.3's Ben McCully, who readily admitted his short-comings, Smith is towering.  He was in Fort McMurray for the second annual fundraiser for the Family Crisis Society, raising money for a new women's shelter, desperately needed in this rapidly growing community.

"We spent a lot of time trying to figure out how we would top what we did last year," said Chef Michael.  "We decided to give you a real back home Backyard Extravaganza."

Arriving on the curling surface at MacDonald Island Park, though incredibly festive, nothing was earth-shatteringly different.  Colourful banners were festooned between the pillars and tables were adorned with lettuce-filled centerpieces, hand-painted rocks, small Play-Doh containers - one at every setting, and an old-fashioned mason jar partially filled with what was labeled as dressing.  Interesting yes, earth-shatteringly different, no, not yet.

Following opening remarks about why the event was so meaningful and important, Chef Michael gave us the first phase of instructions. We were all given a numbered dish, corresponding with our table number (which was 19), and we were to collaboratively create, out of the various colours of Play-Doh, a plate full of food.  We would be given about 30 minutes to do this while enjoying our first course which would be a large bowl of soup.  We also had to make our own salad using the lettuce and vegetables comprising our centerpiece.  And by the way, if we didn't like the soup that had been prepared for our table - they were all slightly different - we were encouraged to visit our neighbors to grab some of theirs.

"It is a backyard barbecue after all," said Chef Michael. 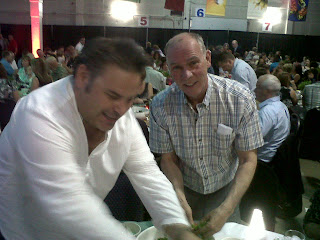 Claude and Dave started on the salad while everyone else (Heather, Tiffany, Iris, Sheldon, Gerarda and Melissa) started turning the green, yellow, orange, blue, and red Play-Doh into a plateful of faux food. 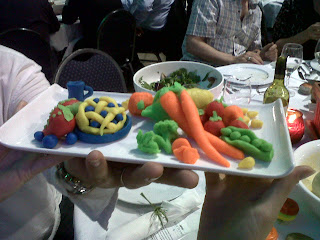 A total of 77 tables submitted a plate containing everything from lobsters, hot dogs, French Fries, fish, vegetables and a few items that were indescribable.

The first course done, Chef Michael signaled to Cam who raised the curtain on what had been prepared next door on what is normally a skating surface.  Thanks to an amazing donation of sod from Dunvegan Gardens, a backyard had been created indoors and flowing outdoors into the parking lot.  There were six food stations - barbecued bison, lobster risotto, beer can chicken, grilled salmon, barbecued baby back ribs and skewered beef.  To top it all off, the food was being served by military personnel from CFB Edmonton, using their own mobile kitchen facilities. 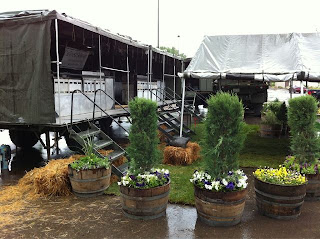 Tables were called at random, and over 700 guests magically served themselves following the strict instructions of the Chef to "stay on the grass," as it would take us where we need to go.

It was an incredible experience, completely unique, comfortable, welcoming.  It was made extra special when it came time to find out which table out of the 77 would win the best plate of faux food award.

"For creating a healthy plate of vegetable and fruits, including a lovely blueberry pie, broccoli, strawberries, peas and kernels of corn, the winner is table 19," said Chef Michael. 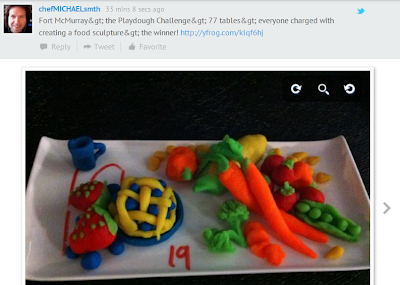 Watching our reaction, you might have thought that we had won the car donated by Alberta Motor Products for the event, as our collective hands shot up in the air and Tiffany dashed to the stage to accept our prize of a couple of original drawings by Chef Michael Smith.  (They will reappear at a fundraising event down the road) 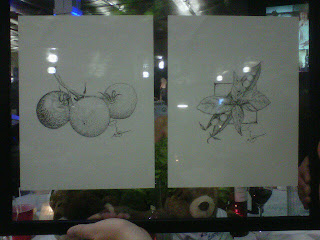 Joy was experienced in good measure, great food was enjoyed, and money was raised for a great cause.  One item, a trip for two to P.E.I. including a full day with Chef Michael, sold for an incredible $46,000 - in my memory one of the highest prices paid for any item at a fundraising event in Fort McMurray.  The same item had recently been auctioned off in Ontario.

"You didn't just beat Toronto," said Chef Michael.  "You beat them to the ground and gave them a good kicking!"

The entire crowd rose to its feet in appreciation and celebration, several times, as the $46,000 bid closed, as the military personnel came out front, and as the incredible kitchen staff emerged from the kitchen to accept our thanks.

"Thank you," I said to the Chef, as I walked by him to grab my food earlier in the evening.

"Greet to meet you," he replied, as his mammoth grip swallowed my hand, genuine to the bone.
Email Post