We woke up this morning to the familiar smell of smoke thanks to a northwest wind blowing the detritus from the mammoth Richardson Lake fire, now smoldering muskeg.  Patrick, staying over at our house for a few days, decided to join me for some early morning fishing at the confluence of the Snye and the Clearwater River.  I was grateful for the fact that I was well dressed, as the wind blowing down the backside of MacDonald Island was rather cold. 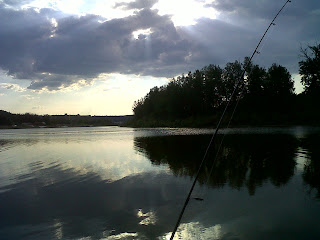 The whitecaps on the Clearwater were as pronounced as I've seen them, whipping up the water into a bubbly froth as we cast our rigs as far as we could on the much calmer Syne stide, trying to find the sweet spot where a fish would rise.

After a couple of hours of battling the breeze, we were really struggling to figure out whether we were getting nibbles or if the rods were twitching because of the relentless current and wind.

"That sounds great," said Patrick.  "Now that you mention it I'm getting hungry."

The tip of my rod took a definitive lurch forward.

I picked up the rod from its holder and whipped it back.  Something was there and it wasn't small.

Weeeeeeeee, went my line as the fish took off, trying to free itself from the surly bonds of my hook.  I started reeling it in, steadily, careful not to give any slack as that would provide just enough give to facilitate a swift escape.  Weeeeeeeee, purred my reel as I started to make some progress, getting the fish close enough to spy a glance at its size.

A long white belly broke the surface of the water about 15 feet from shore giving us our first look at a nice looking pike.  It took about a minute more to get him safely on land and on to my fish weigh scale.  Just a hair over 5 pounds, the pike measured out at 77 centimetres, well over the legal limit of 63.  He was a keeper. 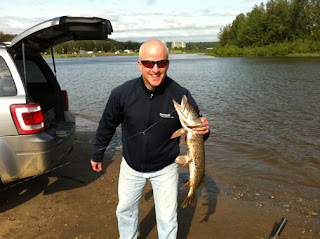 I gonked him on the head with the hammer, took it home and watched a YouTube video to remind me how to properly fillet it.
Heather put together her classic pike niblet marinade:  soy sauce, olive oil, crushed garlic and some ginger.  We let that sit in the fridge for the day then skewered the pieces and cooked them up on the barbecue for dinner.  Fantastic!
Email Post