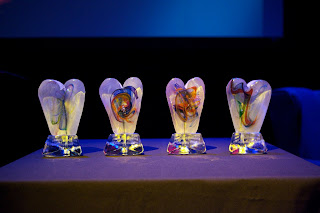 "Who's gonna play your music, if you don't play it yourself?" asked Michael Jones, using a music metaphor to capture the essence of community leadership. 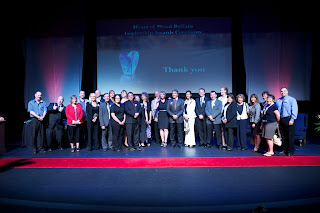 Nominees and presenters at the 2011 Heart of Wood Buffalo Leadership Awards
A total of 28 nominees gathered in Keyano Theatre along with their nominators, friends and family for the first annual Heart of Wood Buffalo Leadership Awards, a part of the Wood Buffalo Community Building Project.  Pianist and leadership consultant Michael Jones weaved a keynote presentation that brought words together with music in a completely unique way.  He shared his story of discovering his musical voice, his unique sound, his place in the world, and then sat down at the ivories to create two different pianoscapes.  It was beautiful, reflective, deeply impactful. 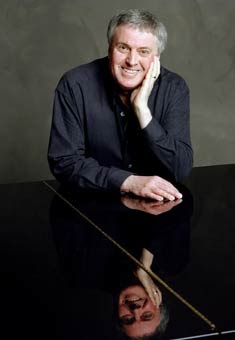 Pianist Michael Jones
"I was in this small club and found this upright piano off in the corner and began playing," he shared.

"After awhile, a young man came and sat on the bench while I played.  Eventually he became really quite serious and suggested rather forcefully that I should find my own sound, that I was playing just like Michael Jones."

It was a crystallizing moment for him, as he continued to play, trying to figure out how to tell this guy that he actually was Michael Jones.

Emcee Claude Giroux announced the names of the various winners and then sat down with them in a living room setting on stage left and engaged in a delightful dialogue that also revealed to which nonprofit their $5,000 award would be going. 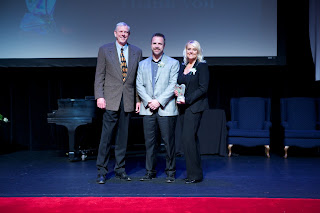 Both visibly touched at being singled out among this prestigious group, Marty and Dennine reflected on leadership and announced their intention to give their cash award to the Family Crisis Society. 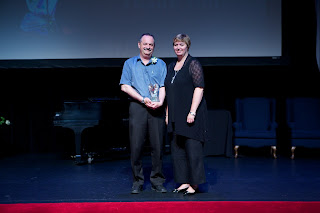 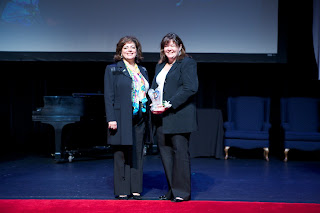 Sana Elache from Leadership Wood Buffalo and Christine Burton from The HUB
For her formative and passionate leadership of The HUB Family Resource Centre, Christine Burton was announced as the recipient of the Nonprofit Board Leadership Award.  Along with several of the other winners, she was asked to share the last three things she does before going to bed.  I can't remember what the first two things were, but her final thing was "crawling into bed with the wonderful man who has stood by her all these years as she did her stuff."

"Yes, no question," she replied.

"I feel the absolute same way."

The audience laughed, and Claude blushed.

"And this metaphor comes from a terrible movie called THE REPLACEMENTS with Keanu Reeves.  At the point where the game was on the line, the coach asked Who wants the ball?"

"The people in this category always want the ball, and they're the ones who take it all the way to the end zone." 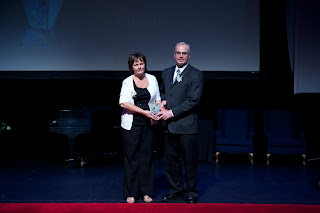 "Tell me a little bit about Victim Services," asked Claude.

"We're the people who arrive on your door late at night with the police to share news that you don't want to hear." 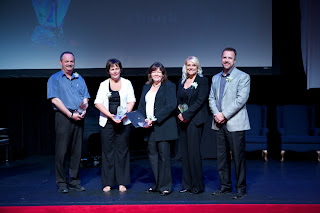 Winners of the 2011 Heart of Wood Buffalo Leadership Awards
"Transformational leadership is about finding your voice," said keynote presenter Michael Jones.  These 28 nominees, individuals and organizations alike, have found theirs and are making beautiful music in our region; they are the Heart of Wood Buffalo.
Email Post