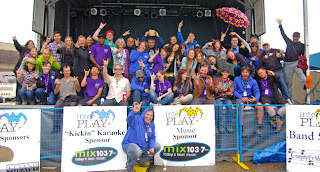 I have a confession to make: I've never been one to enjoy watching plays during the interPLAY Festival.  I always found it incredibly hard to sit through a show without thinking about the million things that needed to happen outside on the street.  Or, I would find it disarmingly exhausting to stop my body that had been in constant motion for several days.  But this was BEFORE, when I was in charge, the guy with most of the answers.  Now I know nothing, and it is blissfully wonderful.

With the move of interPLAY to Keyano College and King, the addition of the iFF (interPLAY Film Festival) and the expanded menu of attractions and vendors it really feels like the Festival has turned a corner.  Yes, the crappy weather attempted to put a damper on things, but it completely failed.  The comments and stories I'm hearing in my limited social mediasphere are exuberant, heartfelt, joyful and deeply appreciative.

Over the many years of attending as many plays as I was able to at interPLAY, there are a few that jump out in my memory.  I'll never forget Brian Bast and his Complete Works of William Shakespeare or Shawn Pallier's performance of The Green Mile.  I've enjoyed seeing young talents like Tim Cooper, Arlen Konopaki, Anglia Redding and many others cut their teeth at this event.  I was absolutely stunned at the most amazing theatrical peformance I had ever seen by Alex Podulke at least year's Festival in DNA and the Dancing Fool.  These memories stretch out over 15 years, 15 festivals and hundreds of plays.  Imagine my surprise when I was knocked flat on my butt not once, or twice, but three times at interPLAY 2011.

We were in Mexico when Jeff Hoffman, Keyano College Visual  and Performing Arts (VPA) grad, did his One Man Macbeth at the Syncrude WinterPLAY Carnival.  He won the Regional One-Acts and went on to do the same at the Provincials.  Outside of Ben's debut in Panto Extravaganza, the Children's Theatre Camp show, One Man Macbeth was the first show I had to see.  I'm so glad I did.

Jeff did to the Scottish play what technology has done to how we are entertained, he altered its reality, squeezed it down into a palatable length of time, brought in new gadgets and devices to drive home the story, and delivered it in a fresh new way.  Outside my spontaneous cameo appearance as Duncan - and subsequently, his ghost - Jeff played all the parts, often bouncing back and forth between several parts effortlessly.  He used dolls, dinosaur toys, plastic and rubber weapons, a bowl of fake blood and even a cell phone to take us expeditiously to that inevitable point in the tragic tale when Macbeth gets slain and the story reaches its bloody conclusion.

There is no question why Mr. Hoffman won multiple awards with this show.  It was brilliant from top to bottom.  I laughed and I grieved; I was shocked and I was twitterpated.  This was a live theatrical experience that I wish I could re-experience many times over - an interPLAY must-see, no question.

Dylan, my 12 year old son, went on a theatrical adventure of his own, inspired by the fact that his mom's cousin was starring in a show called Rubbish.  By the end of the Festival, he had seen a remarkable 7 shows including the story of two teenagers who end up in the world of bugs, flies and over-sized garbage.

Rubbish was written by Francis Menningke, a South African theatre artist who now resides in Fort McMurray, and directed by another Keyano College VPA grad Michael Beamish.  Rubbish featured the playwright and Nathan Loitz, also an alum from Keyano.

From the first moment when the two put themselves into their opening positions, I was hooked.  Physical beyond measure, expressive, collaborative, they were two hearts beating as one.  With no set pieces or audio support, the artists painted a picture with their movements, sounds, intention and attention.  It was completely mesmerizing and unlike anything I had seen before. A remarkable performance, we rose to our feet in appreciation as the lights faded.

Throughout the weekend, I had heard rumblings about Waiting for the Parade, about it being one of the can't-miss shows of the Festival.  Written by John Murrell, I had seen a production of the play a half decade ago when our drama students tackled it.  Set in 1940's Alberta, telling the story of five women and how they coped during the war years, the show was produced by Katie's Playhouse.  It ended up being one of the most impressive ensemble efforts I've seen.  All of the performances were so honest and compelling.  I felt like I had entered a time machine and was transported back to those halcyon days.

By all accounts, interPLAY has found a new and better home at Keyano College and King.  Was the event perfect?  Was everyone as twitterpated as I was?  No, not at all.  There is room for improvement - adjustments to the site layout and some operational things that need to be rethought.  But, overall, it was an unqualified home run, and ripe with many stories, experiences, and memories.

This was Executive Director Claude Giroux's final interPLAY as he moves to West Vancouver to begin his tenure as the leader of the Kay Meek Centre.  He has helped shape and grow interPLAY in such a wonderful way.  This region will be forever grateful for the legacy he has left behind.  Soon, some new leader will pick up his torch and grow our treasured celebration of the visual and performing arts in ways we haven't even begun to imagine.
Email Post