Tackling the Turtle and the Going to the Sun 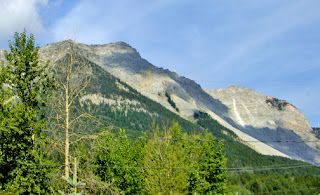 They had decided to tackle the north peak of Turtle Mountain, "they" being Michael and Kathryn, my brother- and sister-in-law.  And they were intent to bring Heather and Ben with them.  I'm sure I would have been invited along for the hike but I had ironically ripped my heel open wearing a pair of new hiking boots during the first day of interPLAY.  I had an Achilles tendon surgery in 2000 and the scar they left behind is entirely too sensitive to new shoes.  I've been fighting an infection for the better part of a week and it's only now starting to get better.  So, I had a dandy excuse to pass on climbing the mountain. 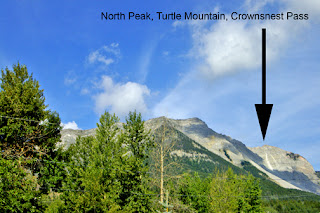 Looking from the back patio at my in-law's house you can see Turtle Mountain off to the left, and their north peak destination with a pair of high-powered binoculars.  Just looking at it and imagining my 8 year old son climbing to the top made my stomach spin.  Me and heights have had a disintegrating relationship since I had a vertigo episode at the ski hill in Fernie a number of years ago.

They gathered their supplies and left for what they thought would be a two and a half hour climb to the summit, going up a modest approach from the eastern side of Blairmore.  From what they tell me Ben took the lead right from the start, becoming more motivated as they got higher and higher. 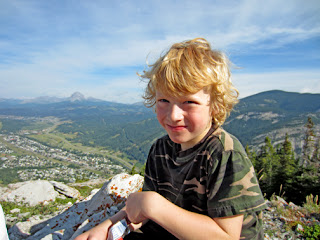 "I couldn't keep up with him," said Kathryn, a seasoned climber and outdoor enthusiast. "We're now calling him Benny Goat."

It was around 11 am when they got to the top, right around the time I was looking through the binoculars.  I saw small figures moving around the Canadian flag that had been previously planted at the summit.  Even though I was firmly planted on the ground, my stomach was still doing a dance as I looked up and wondered if Ben and Heather were among those at the peak.  About 30 minutes later, I saw more movement and an additional two figures, mere dots in the distance even looking through the high powered scope that Susan (Heather's mom) had set up. 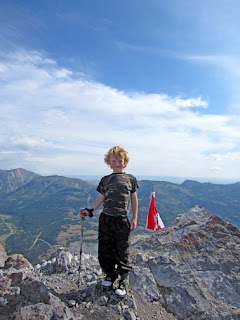 They made it home a couple of hours later and confirmed that they had done it, and that it was them we must have seen.  I was so proud of them all, but especially Ben.  It was quite an achievement for such a young fellow.  I spent the rest of my time in the Crowsnest wishing I could dash up the side of that mountain and experience it for myself, if only to stare my growing fear of heights in the eyes and see who blinks.  But I knew that another dance with fear was just around the corner. 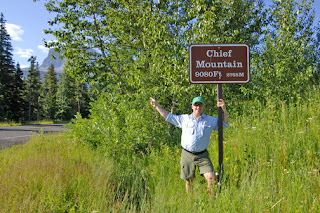 We had decided to sweep down into Montana, around old Chief Mountain, as part of our summer vacation.  As I type this we are in a wonderful hotel room at Staybridge Suites in Missoula.  But to get to here we had to tackle the Going to the Sun Road, a lofty piece of highway that had been completed in 1932, piercing 53 miles through Glacier National Park and providing a genuine tourist route through pristine mountainous terrain. 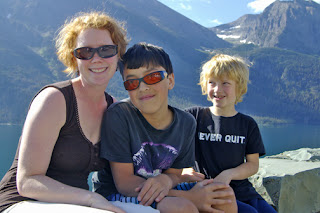 The first piece of the drive proved to be the toughest for me as we left St. Mary and went up around McDonald Lake.  I purposely took advantage of several pullouts  to get out of the car and calm my nerves. 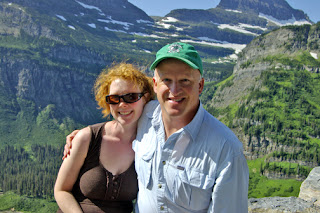 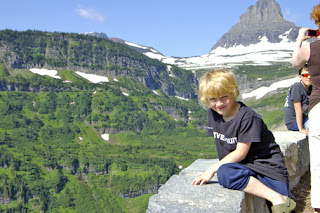 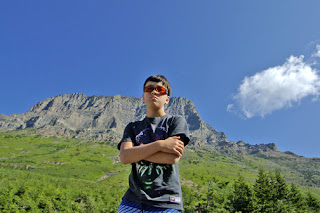 As we got closer and closer to the summit, the traffic increased and things slowed down to a crawl which significantly took the bite out of any remaining vertigo waves that I was experiencing.  The parking lot full and our stomachs empty, we bypassed the interpretive center at the top of Logan Pass and made our way down to the bottom with the promise of a good lunch before going to the Montana Vortex and House of Mystery, a subject that deserves a blog post all of its own.
Email Post