Dylan wanted to get his hair cut.  For the record, it was not my suggestion, though I was very accommodating and excited that he wanted to lighten his load.  It had been all the way back in October, shortly after his leg surgery, that we last had his locks cut.

Crowsnest Pass, where we are stationed for the first leg of our summer journey, is made up of a number of small communities.  We had dropped Heather off for a coffee date in Coleman before doubling back to the commercial centre of the Pass, Blairmore, to dive into one of the two hair connoisseurs located on the long, stretching main street that runs adjacent to the Canadian Pacific line.

I walked across the wide street, where cars drive slowly enough to safely pop across without fear of being dinged.

The barbershop, with its pole spinning out in front is nestled between a used goods emporium/antique shop and a nondescript Canadian Bank of Commerce.  I poked my nose in to find several smiling people eagerly awaiting their turn on the old-style barber's chair.

"Oh, it's gonna be at least a couple of hours," said one old timer, smiling widely.

I thought he was joking.

We turned around and went back to the other end of main street where John's nephew Garry runs a shop.  No cars out front, we were pretty sure that we'd get in right away.

"Are you looking for Garry?" said a lady coming from inside the establishment that doubles as an insurance agency/used goods shop (used goods are pretty popular around the Pass).  "He won't be back till quarter to two."

Once again we returned to the car and continued down 20th Avenue to the Tim Horton's perched just alongside Highway 3 with absolutely no line-up.  I almost went into cardiac arrest as I fully believed that line-ups were a Timmie's constant all over the world.

We checked out Coleman for any sign of a barber shop before beetling back to Blairmore to get in line at John's.  It was about 1:15 when we arrived and took our place in line behind a distinguished gentleman with white hair and beard and a mustached fellow who used to work at Syncrude in Fort McMurray.  A young fellow came in behind us, another summer visitor, with long straight locks wanting to get a brush cut.

John Vigna has been cutting hair in Blairmore and in this spot since 1959.  A fourth fellow came in, also from Fort McMurray but originally from Crowsnest - a blaster from Suncor, who remembers having his hair cut by John back when he was a boy. 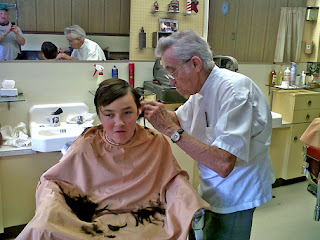 He is old school.  There is no rush in his shop, as he carefully snips and clips, smooths and manicures.  No strand of hair is left untended.  And just when I thought he was done, he would grab a new implement and continue on his journey toward perfection.  The sign that the end was near was a quick dash into the back room to grab his shaving brush.  He daubed the back of the neck and the sideburns then grabbed his straight razor and run it up and down his leather strap a couple of time before putting the finishing touches on his client. 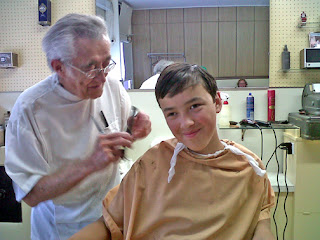 The sign just behind the second barber's chair, unused for years from what the locals were saying, declares the complicated price structure: $8 adults, $6 pensioners, $6 infants.

We were out the door by about 3:30 pm, a long but delightful experience - a little bit of The Andy Griffith Show mixed in with Petticoat Junction.  Even the Chief of Police showed up to get a trim, although he didn't look like he needed it.

"So how many officers do you have on duty on a day like this?" I asked.

Welcome to the Crownest Pass, a delightful blast from the past.  It was time well spent waiting for a hair cut. 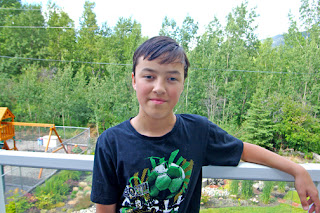