Your computer has been hacked! 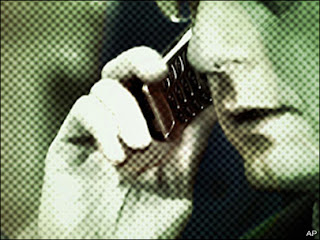 We get a lot of funny phone calls these days.  From political surveys to unwanted sales calls to unsolicited offers of free air miles, we've arrived at the point where we just hang up before anyone speaks.

This morning's call was a little different.

"Sir, we have reason to believe that your computer has been hacked," he began, sporting an accent from somewhere in southeast asia, probably India.

"Sir, how old is your computer?"

What the age of my computer has to do with anything I have no idea, but I told him.

"Before we go any further, I need to verify you are who you say you are, and that you are legitimate.  How do you suggest I do that?"

He gave me one phone number, then another in rapid succession, realizing on the fly (I think) that he was talking to someone in Canada.

"We have a report that someone was on your computer at 2 am.  Was anyone in your house on the computer at that time?  Someone is using your IP address to conduct illegal business, including bank fraud."

At this point, this was starting to sound real, and potentially disturbing.

"Can you go to your computer and check some things for me?"

He guided me through the event log and a check of applications, security and systems.  Multiple error messages and warnings appeared.

"Just one error message indicates that the hackers can completely crash your computer.  When they are done doing their illegal activities, this is what they do to cover their tracks."

We're about 10 minutes into the process at this point, running through various checks, with enough descriptive qualifiers to suggest that we had a significant issue on our hands.

"I'm going to pass you along to a Microsoft Senior Technical Advisor named Marcus."

Marcus came on the line a few seconds later, quieter, with a distinct South African accent.

"How many years old is your computer?" he began.

"What do you see on your screen?" he continued, taking me through similar territory to the previous guy.

"How many other computers do you have in the house, and how old are they?"

At this point I stopped him.

"Look Marcus, before we go any further, I need to absolutely verify your call.  How do you suggest I do that?"

He said that I was absolutely right and that I should call the number the previous caller gave and then ask to speak to Marcus.

"Let me tell you what I'm going to do Marcus.  I will call that number, but only after I call my IT professionals to get their advice."

Silence on the other end of the line.

"Marcus, you can save us both a lot of time if you admit this is a scam.  Marcus?"

Whew!  I almost got suckered in.  Now, I'm on hold with the Canadian Anti-Fraud Centre (CAFC) at the advice of the local RCMP.  I have several phone numbers (probably fake), a name and a story.  Let's see what happens.

Addendum:  in talking with the representative from the CAFC I found out that they have received complaints like this en mass from across the country in recent days.  The next stage in the scam is that they ask for control of your computer at which time they tell you that you have a significant problem that requires specialized software.  As your warranty has long since passed, they ask for a credit card number.  Scores of people have been stung for between $100 and $600.  BEWARE.
Email Post
Labels: fraud phone scam