I think it was more interesting that the rain was pelting down for the Canada Day parade.  Sure, a bright sunny morning probably would have attracted more people, but there was something profoundly inspiring waving to families huddled under much-too-small umbrellas for the purpose.  They were full of smiles, intent on manifesting their belief in, and love for, one of the greatest countries in the world. 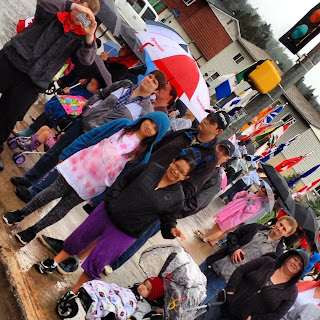 Along the route, I saw scores of new Canadian families, multi-generations of people who have planted new roots in what was recently described as "Ground Zero for opportunity in Canada".  Pakistan, India, Somalia, Nigeria, China, Philippines, Lebanon, and countless other countries were well represented as Mayor Melissa Blake, Councillor Jane Stroud, Councillor Al Vinni with his parents from Thunder Bay, and I rode the City Centre McMurray float down Franklin Avenue. 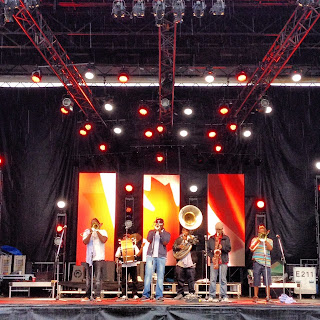 By the time we made it over to MacDonald Island for the free barbecue and family entertainment on the main stage spirits continued to be high, refusing to be doused by the deluge of moisture that Mother Nature was dishing out. 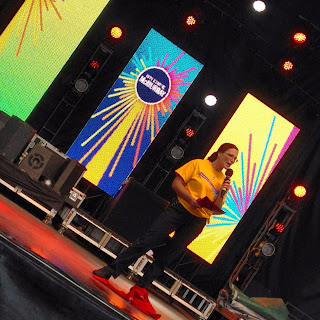 Her Worship shared the vision for City Centre McMurray, a transformation initiative determined to turn our downtown into a global point of pride.  As soon as it gets the green light from regional council, the city centre redevelopment program will go from vision to final design and construction.  Several catalyst projects, including a new civic centre, arena, city square, aging in place facility, bus transitway, arts centre and iconic pedestrian bridge over the Snye to MacDonald Island, will send a message to the development community that we are open for business and ready to welcome the world. 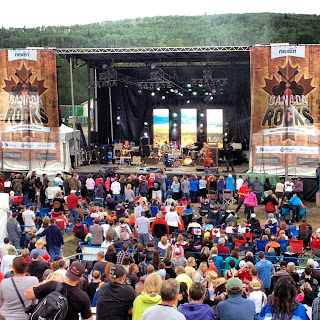 We took the free shuttle over to the CanadaROCKS site on MacDonald Island in the evening to enjoy the music of Doc Walker, Corb Lund and Blue Rodeo.  Up in the VIP boxes, I spent more time visiting with people than I did listening to the music - getting into the vibe of the show is easier to achieve down near the stage front than it is up on the scaffolding - but it offered me the opportunity to meet some great people. 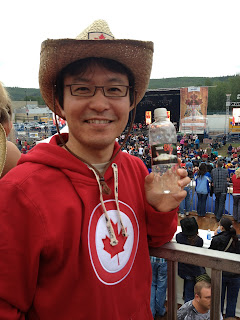 It was an honour to chat with Hideaki Taguchi from 360 Architects of Kansas City, one of the firms engaged in the MacDonald Island Park Expansion project.  Hideaki is the creative force behind the iconic undulating design of the roof that will cover the permanent stage at the east end of the performance field.  With a translucent covering, the waves of the roof will be lit from underneath to emulate the northern lights for which our region is famous, and which made an appearance as Canada Day 2012 came to a close, according to MacDonald Island COO Tim Reid, who shared that priceless nugget of information on Twitter before heading home in the wee hours of the morning. 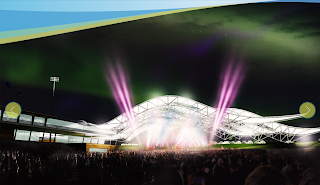 Hideaki was animated and excited as he articulated the scope of this project, and the boldness it demanded.  It was always said, from the very beginning, that the city centre redevelopment project would attract attention, both in terms of its size and its creative potential.  As Hideaki talked, it became clear to me that this was not just another project, but something significant, compelling, challenging, inspiring.

They played a video describing how MacDonald Island was going to change and the gang from 360 Architects beamed - their hard work being shared with a large captive audience.  It was high fives all around as the video pitch came to a close and Blue Rodeo took the stage.

Fort McMurray is on the cusp of something truly remarkable.  There is an energy, a buzz in the air that is almost intoxicating.  Fast forward just a short couple of years, if all goes as planned, we will have begun our metamorphosis into a world-class city centre and a place where living, working and playing will be unlike anywhere else in the country.  It's a bold vision, but Wood Buffalo is a bold place, where making the impossible possible happens almost every day.
Email Post