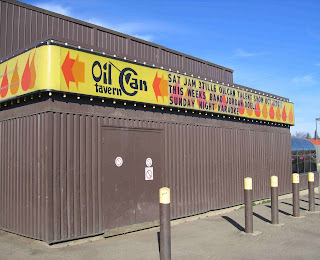 The familiar bright yellow marquee complete with flashing light bulbs and messages of fun you'll find inside will soon go dark for good.  The Oil Sands Hotel, including the Oil Can Tavern, Diggers and Teasers is closing its doors on July 21, 2012 marking the end of one of Fort McMurray's longest running businesses. 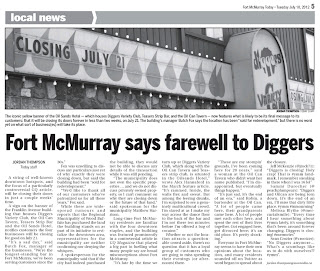 Its history digs far back into the 1930s, according to manager Butch Fox in a Fort McMurray Today story published this morning.  In recent years, its environs were often highlighted in media reports and stories attempting to illustrate the perceived underbelly of a boom town.

For many, it was the Fort McMurray place where everybody knew your name, a watering hole where great conversation was sure to be found along with a few surprises.  For others, it was a place to let off some steam, to go dancing with friends, or listen to some great live music. 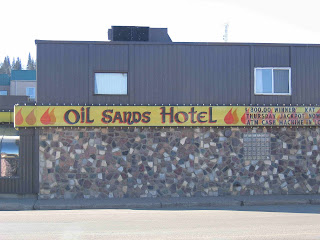 My relationship with the Oil Can goes back to 1997 when I served as one of the judges in their annual talent search.  Country music star Craig Moritz was still a wannabe talent show contestant back in those days, working hard to find his voice and establish his style.  We enjoyed loads of talent and lots of laughs as the bar filled night after night to support friends and neighbors who had the courage to get on stage and belt it out.

I met Dylan's mom in the first year of that contest.  She ended up winning the following year, delivering a performance of "It Wasn't God Who Made Honky Tonk Angels" that set the place ablaze with appreciation like I've never seen before.

These kinds of establishments have an inherent undercurrent that you can't deny.  People sometimes drink too much, get a little too rowdy, and get exposed to the rawness of that nocturnal world that by nature is as unpredictable as it is unpretentious.

Inside those walls are the caretakers, the people who do everything they can to ensure that people can have some fun, get a little noisy, celebrate in safety.  It's never perfect, but the people behind the bars, carrying the drink trays, guarding the doors are to be remembered in these final days before the doors close for good.  In some cases, they are moving on to new things after decades of serving customers, of looking out for patrons who were no longer able to look out for themselves.

So, to Butch and all the innumerable staff who have kept the music playing and beverages flowing for over 75 years, thank you and Godspeed.
Email Post