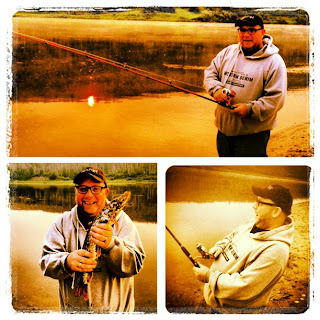 All week, Country 93.3 morning guy Jerry Neville was previewing the fact that I was taking him fishing on Saturday morning.  Our original plan was to meet at the confluence of the Snye and Clearwater at 6 am.  But after a scheduling issue popped up, he graciously asked if we could gather at the river for 5 am instead.

Getting up at 4:30 is sleeping in for this early morning radio guy, but for me, it was a stretch hauling my  butt out of the sack a full hour earlier than normal.  I made it there in time though, Mr. Neville already patiently waiting for me in the bright and shiny clean station vehicle, coffee in hand and ready to go. 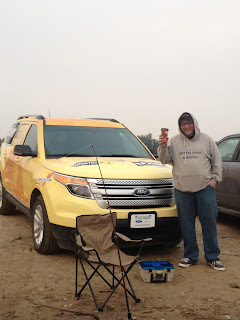 We pitched our rod holders, baited up our barbless hooks with frozen minnows, and began our patient vigil. 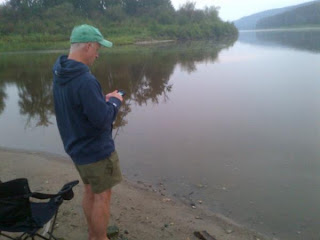 Jerry pulled out his camera / video recorder, and sitting alone along the Clearwater River began discussing City Centre McMurray, positive developments at Keyano College, and myriad other topics.  While he asked the questions, I did my best to answer, both of us keeping half an eye on the tip of our rods.

"You've got something," I said, as Jerry quickly put down the camera, grabbed his rod and gave it a yank.

"I've got one," he said, reeling in excitedly only to discover that somewhere along the way his catch had slipped the surly bonds of the hook. 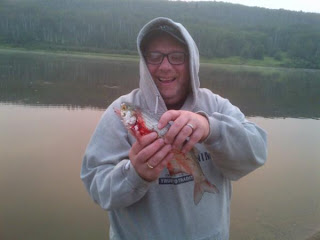 Eventually a goldeye latched on and he was able to bring it in, his first official catch in Alberta.  We were both quite concerned that getting the hook out of his mouth may have done him in, as he floated away sideways.  Wearing my Crocs, I walked out into deeper water, gave his tail an encouraging wiggle and it seemed to get its second wind and swan away slowly. 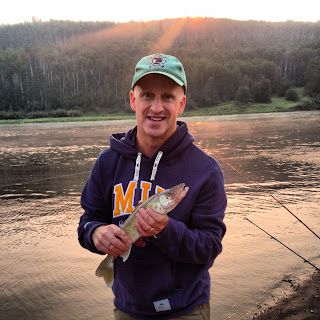 Next, it was my turn as a 46 cm walleye decided to go for a dance with me.  It put up a nice fight and provided Jerry with his first glimpse of the species of choice in the west.

Time ticking away, with Jerry required at Northstar Ford for a remote broadcast at 9 am, we packed away the pickerel rigs and brought out some lures to see if we could find any northeners.  Sure enough, using a bass lure, Jerry landed a nice little pike in minutes.  It was a happy moment. 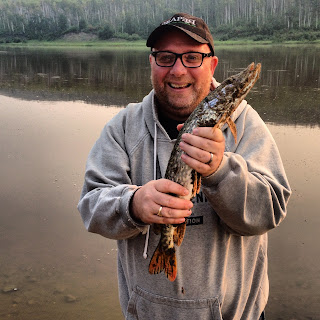 Despite the fact that I was cold (I should have worn pants) and a little tired, I enjoyed the riverfront interview and fishing fellowship on the first day of my summer holidays.  Thanks Jerry!
Email Post