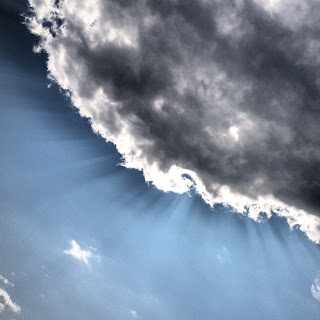 We went to bed last night and the thermometer was showing 29 degrees.  Getting up this morning it had cooled to 27, a drop of two degrees overnight.  Sleep is fleeting as the body adjusts to temperatures that are unreasonably high.

For the record - though I'm sure it is obvious - we don't have air conditioning.  We have fans, two of them.  One is a stand-alone unit that blows air in Ben's direction.  The other is a ceiling variety that keeps the air moving in our bedroom.

We have a fully developed basement, which is more than several degrees cooler, but for whatever reason, we choose not to descend to the guest bedroom for nocturnal relief.

The sunshine and heat inspired me to bring down the cedar strip canoe from its perch up in the garage on Saturday.  A gift from Heather's mom and dad - a winter long construction project in the 90's - the elegant craft has not come out of the rafters for a number of years.  Using a rudimentary sling system, I was able to bring it safely down to the ground and load it up onto the back of the Escape.  Heather dropped Ben and I at the boat launch near Waterways, where we set off for our first canoe trip together back to the Snye. 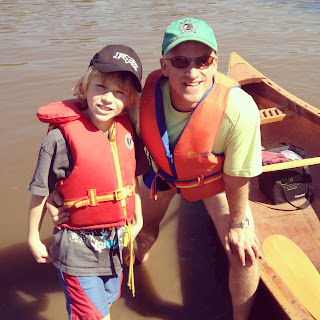 Paddling while floating downstream is more about keeping the boat from crashing into fallen logs and other boaters than it is about creating forward momentum.  The current, strong from recent rain, is enough to carry us from start to finish with little to no effort.  But paddle we did anyway, Ben giving it a real solid try despite the fact that the oar was way too long for his squat size. 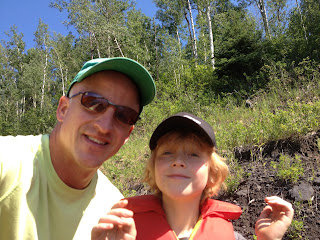 We picked a spot on the north shore, a rocky beach at the base of a blackened cliff face, to take a break and go for a quick swim to cool off.  The water was perfect and a great escape from the punishing rays and incessant horse flies that hovered about trying to make us feel special. 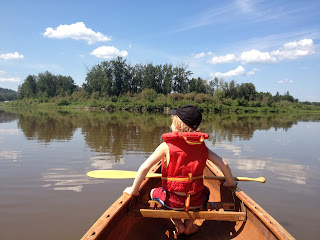 The entire trip took us maybe two hours, with lots of meandering and lollygagging.

I went on a solo trip on Sunday, but had Heather drop me off a little farther upstream, closer to Draper.  We found a spot to launch after taking the first left on Draper Road, into a series of overgrown roads with old steps and foundations hidden in the weeds.  I checked with my friend Len to see if he knew what used to be there, as it appeared to be significant, like a former settlement or industrial park.  He suggested that it might have been the spot of a former sawmill and possibly a concrete plant - a spot to further explore another day. 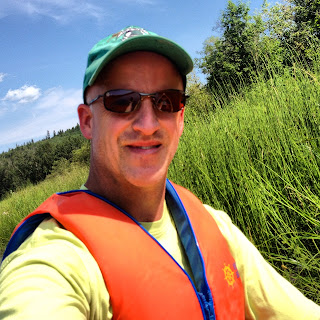 This time around I hugged the southern shore as I drifted through historic Waterways, passed The Prairie in behind Canadian Tire and Walmart, and along the final forested stretch before arriving at the confluence of the Clearwater and Snye.  It was a peaceful trip, though busier on Sunday, as the floaters were out in full force - young people on a rag-tag collection of inflatables and rafts soaking in the sun and the suds. 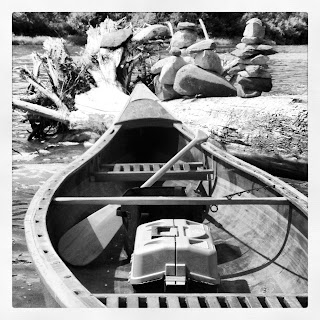 I found one spot where guests had piled some rocks on an old log, three sets, including a fourth in the water.  I love finding holistic markers like this, much more so than the other markers of human activity, tossed aside cans, bottles, garbage and the like.


It was a great way to embrace one of the hottest days we've experienced in a long while.  By the time I pulled the canoe out of the water mid-afternoon, the temperature was sizzling, showing as 36 degrees in the car when we set off for home.  If that was hot, today is destined to be even hotter, as weather prognosticators are predicting a potentially record temperature for this date.
Email Post