A question popped into my head late last night that I posted on Facebook before going to bed.  Here is the post:


"I'm going to ask a very hard question: What do we need to do differently to inspire a live music culture at Fort McMurray festivals? We had two amazing Juno Award winning artists on the stage at the Big Spirit Festival for a free concert and only a smattering of people. Yes, it was raining, but there should have still been a healthy crowd enjoying these amazing artists. In all sincerity, I'd love your suggestions."


By the time I woke up this morning the string of comments was 50 long and growing.  Had I touched a nerve, or were people just waiting for an opportunity to give their opinion?  Either way, I'm thrilled with the responses.  Thank you. (feel free to chime in by commenting on this blog)

It was pouring rain by the time that Digging Roots took the stage at 9 pm.  In the audience were Ben, Spencer and I, along with several security guards, a few festival volunteers and production staff.

We had spent time with the Juno Award winning band earlier in the day when they conducted a workshop under one of the tents on site.  Ben has been expressing a strong interest in music in recent months and was eager to gets some hands-on experience.  As they dragged him up to play the resonator guitar, I was completely floored as he began to integrate the riff from Deep Purple's "Smoke on the Water" with what the band was playing. 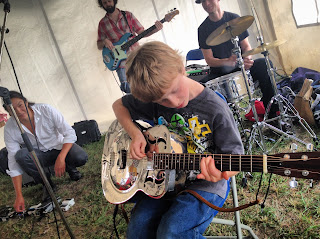 Not only did it sound good, it sounded like he knew exactly what he was doing.

Before the workshop was over, they brought him up with his harmonica to play with the band, along with a few other vocalist volunteers, and even gave him an opportunity to perform a solo.

He was flying high by the time we left the festival, walked along the under-construction portion of Prairie Loop Boulevard and turned onto Father Mercredi Street.  We were absolutely coming back for their evening show after that kind of experience.

So later, there we were, standing out in the rain - Ben and Spencer sitting on chairs and me, standing in the middle holding an umbrella.  ShoShona and Raven were so gracious in welcoming us, not making us feel awkward for the lack of people around.  Events Wood Buffalo's David Whitelock did the same, embracing the moment for what it was, and heartily introducing the band to their eager audience of three.

As the boys were getting soaked and cold, I was mortified at the possibility that we would have to leave in the middle of the performance.  Thankfully, others were drawn in by the music, and we were no longer alone.  And just as we were about to start our return journey home, ShoShona asked Ben from the stage whether he had brought his harmonica along and whether he would like to join them for a song.

He shook off the offer for a moment or two, but with some robust encouragement from the audience, he slipped between the fence and the big speaker at the base of the stage and ambled up the side stairs to join Digging Roots for an unforgettable experience. He was good; he was really good. 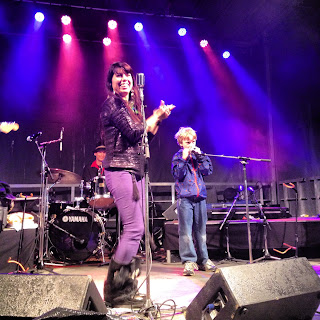 For one 9 year old boy, this sparsely attended concert may prove to have been a formative moment in his life, an experience that could influence his artistic path.

Why weren't there more people?  Why have free live music offerings at both interPLAY and Big Spirit fallen flat?

"We need to do this a different way," I said to Jock Howard, Events Wood Buffalo board member, while standing in the rain listening to Raven blasting through a blues tune.

Once again, this is a shared responsibility.  This is not about assigning blame or poking at the hard-working people who put these and other events together.  Rather, this is about trying to better understand the community within which we live, a community that is vastly different than it was 5, 10, and 15 years ago when I first arrived.

I heard a figure quoted in passing recently that suggested that less than 50 percent of our population has been here five years or longer.  What insights does that offer about how to program community events?

Think of the media fragmentation that has occurred in recent years.  Getting a message out to the masses is much more challenging and expensive than it was a few years ago when we only had two radio stations and one newspaper.  Add to that reality, gargantuan flat-screen TVs and home theatre systems that are the rule rather than the exception, exploding social media channels, satellite radio, and myriad other entertainment options, and it is harder than ever to effectively penetrate with a message, to gather an audience.

All of that said, I still believe it is possible to create a live music festival culture that is dynamic, curious, resilient (to inclement weather), and reflective of the passion that so many of us feel.

"Did he volunteer to go up there?" asked a young Big Spirit Festival patron.

I can't agree more.  And perhaps Ben's moment in the spotlight, blowing on his harmonica, overcoming his fears and expressing his passion is emblematic of our collective hopes for the future - that Fort McMurray expresses its passion, unearths its many talents, and demonstrates its appreciation for the many disciplines that will define a place that truly is culturally vibrant.
Email Post