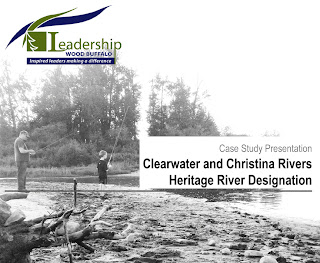 A number of years ago, a group of us in the inaugural class of Leadership Wood Buffalo embarked on a case study to try and understand the leadership lessons from the process to get the Clearwater and Christina Rivers their revered Heritage River status. Disparate user groups were miles apart in terms of their vision for creating a management framework for this 195 kilometre stretch of water when they began deliberations in 1988.  It took over a decade and a half to develop language and a vision that would satisfy both the trapper and the motorized recreation enthusiast, the botanist and the fisherman, and ultimately satisfy the government that all parties were in agreement.

"No question was left unanswered; every bloody word was reached by consensus," said Ruth Kleinbub, who began lobbying on behalf of the Clearwater back in the 1980s.  "The river had to be protected."

Today, the management framework for the Clearwater River still exerts tremendous influence, and continues to preserve a ribbon of green that runs from the Saskatchewan border all the way to the confluence with the mighty Athabasca River at Fort McMurray.

The river and waterways in general have been on the minds of many in recent week as controversy erupted over the future of the Snye, a small patch of water that is in the heart of our city centre redevelopment zone.  Thankfully, things have simmered down as communication lines have opened up between the SOS (Save Our Snye) group and municipal planners and administrators.  The good news is that the group - now numbering over 3,000 members on Facebook - remains activated and engaged. 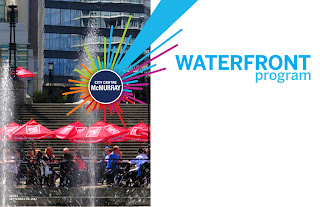 I've had a glimpse of the future - as will the general public in a matter of days - as a DRAFT City Centre McMurray Waterfront Program makes its rounds.  The vision, building on both the Municipal Development Plan and the City Centre Redevelopment Plan, focuses on providing unparalleled access to the entire stretch of waterfront, beginning at the MacDonald Island land bridge and going all the way down the Snye, following the Clearwater River past The Prairie, around the corner to Waterways, all the way to the Horse Pasture lands just before Draper.

Imagine being able to go for a bike ride or a long carefree walk from one end to the other on well-lit, well-maintained paths. Imagine enjoying a concert with thousands of your neighbors sitting on steps facing the river where a floating stage is featuring your favourite band.  Imagine climbing a public lookout tower at the confluence of the Snye and the Clearwater, enjoying a heart-stopping view of the river valley, MacDonald Island and the Athabasca River off in the distance. 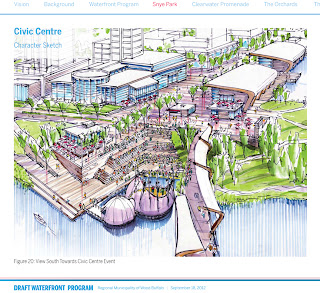 These amenities and features along with many others are included in the DRAFT plan. The document captures the rich history of the role our rivers and waterways have played in the development of this community and region. It explores themes of sustainability, safety and security, "Long Nights - Bright Lights", and public art.

It introduces a contiguous park concept that begins at Snye Park and continues through Clearwater Promenade, The Orchards, The Prairie, Waterways Park and Horse Pasture Park.  It anticipates inevitable high water in its design and preserves a ribbon of green that will transition into a world-class amenity that can be enjoyed more fully, more easily, and no matter the season.

How does that sound to you?

There are three Community Engagement Sessions for you to see the DRAFT plan and share your thoughts and ideas.  All of the sessions will take place in the Suncor Community Leisure Centre at MacDonald Island.

Here is the official news release from the Regional Municipality of Wood Buffalo.

If there is one thing that has been proven true in the past two years it is that great public engagement results in plans that are stronger, more sustainable, resilient, and achievable.  This engagement phase of the process is the most critical. I hope you will share your perspective, wisdom and passion for our waterfront over the next couple of weeks.
Email Post