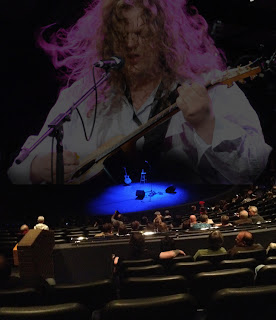 I had a vision last night of Matt Andersen being transported back in time to the summer of 1969, emerging onto the stage on Max Yasgur's farm, and beginning an epic romp through "Ain't No Sunshine". I saw a million heads popping out of the tarps and tents protecting them from the rain, the purple haze clearing, and the Woodstock Music & Art Festival going absolutely wild.

Channeling some of the giants of music - Bruce Springsteen, Joe Cocker, Bo Diddley among them - Andersen captivated a full house at Keyano Theatre last night in a way that I haven't seen before.  As he flipped his hair back, eyes closed, head tipped back, his fingers danced with his guitar creating an array of sounds, sensations and sweet melodies.  At one point he even created the sound of a rumbling train.

"The first row is thinking: He's a lot bigger than on YouTube," he joked after drifting down to the edge of the stage with a guitar solo.

The truth is that from where I was seated, near the back of the theatre, he looked to be way smaller than what I thought he'd be.  Either my eyes are failing me, or Mr. Andersen has dropped some serious weight, though his presence remains larger than life.

His whole body is an instrument, how it moves back and forth, how he flails his hair in time to the music, how he finds the magical sweet spot of the microphone going from captivating pianissimo to bombastic forte seamlessly and with sweeping force. 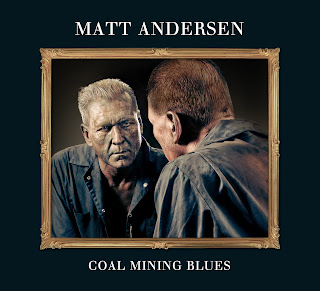 He had the audience at hello, but he kept them in the palm of his hands through two sets that included classics like "I'm on Fire" and "Steamroller Baby", older self-penned favourites like "So Gone Now" and "Baby Come Back Home", to selections from his latest release Coal Mining Blues like the title track and "Home Sweet Home".

"This is almost too good of a way to start the tour," he said just before he vaulted into his closing number, "Devil's Bride".

The crowd of over 500 rose as one and poured out their appreciation for a Canadian musical artist who is nothing short of epic.

"I'm not gonna bother with that walking off the stage bit," he said, re-tuning his guitar for the requisite encore selections.

Unfortunately, Ben and I had to duck out at that point - he was already 90 minutes past his bed time - but I'm sure the closing songs further fueled the fire of fascination for Matt Andersen.

"Russell!" yelled Misty, gathered with her peeps coming out of rehearsal for next month's production of Extremities at the back of Keyano Theatre & Arts Centre.  "How was it?"

"Unbelievable!" I yelled back.  Superlatives just don't do that performance justice - one of the best concerts I have ever seen.
Email Post