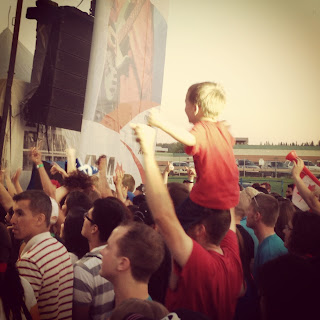 I don't know exactly what was happening behind the scenes, but when I saw the tweet that Simple Plan had moved up on the bill to the 9:30 pm slot originally earmarked for Mother Mother, I knew something had gone askance.  I found out later in the evening that the journey north from Milwaukee turned out to be an adventure pummelled with flight delays, cancellations, and luggage that ended up in some far off distant airport. 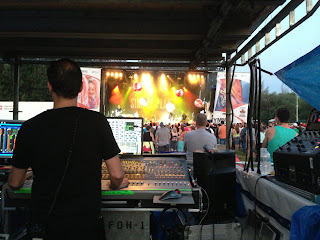 Simple Plan, God love them, stretched out their set, keeping the crowd energized, while Mother Mother landed in Fort McMurray and were shuttled post-haste from the airport to the festival site on the Clearwater Field on Hardin Street. 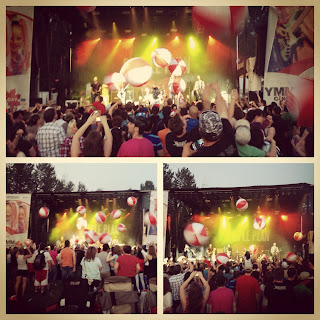 Even though I come from a special events background, I still marvel at the controlled chaos that happens at events like CanadaROCKS.  There are so many details that have to work together to pull off a show of this scope and scale.  The number of moving parts is incredible, and as a community, we need to be grateful for the hard-working souls at Events Wood Buffalo who manage it all. 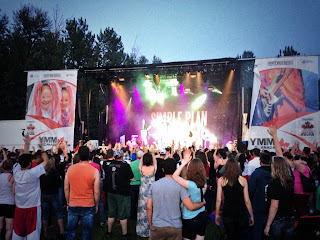 As the Simple Plan set came to a close, it was all hands on deck from a technical perspective.  The audio team scurried about trying to execute the world's quickest changeout and soundcheck.  The guys in the black "Crew" shirts ran back and forth from the stage to front-of-house position, fully aware that the show had to go on, and that the fireworks spectacular was looming off in the near distance. 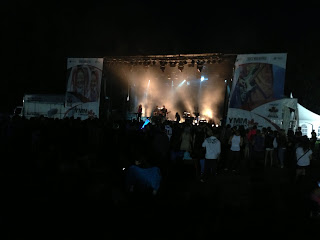 As Mother Mother began their opening riffs at about 11:45 pm, one of the lead audio guys zoomed by, two pronounced rivulets of sweat paying testament to the epic turnaround that had just been accomplished, made extra challenging because of the mix 'n match equipment dance that had just occurred.  The luggage issues that resulted from the myriad delays and cancellations included equipment essential to the show.  There was abundant generosity of spirit happening in the backstage area, as other acts stepped up to lend whatever was missing. 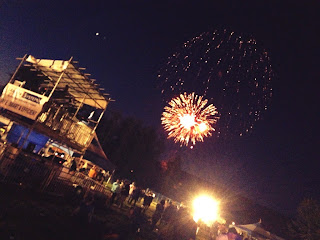 In the end, the fireworks were blown off about 20-25 minutes later than expected.  The folks not on the festival grounds, many who had stayed up late with their children watching from the other side of the river or wherever they find a good vantage point, likely had no idea what was going on.  Such is life, despite the best laid plans. 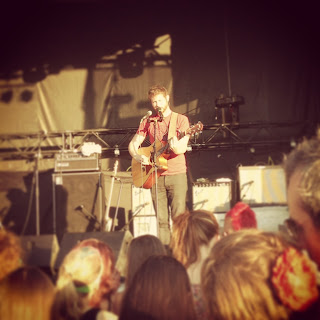 The highlight of the night for me was the life-altering set by Dan Mangan and company.  I tweeted that "Dan Mangan is an artist of the highest order," halfway through his set, marvelling at his entire ensemble and the sonic complexity and beauty that they were creating.  With free-jazz experimentalists like Gord Grdina (guitar), Kenton Loewen (drums), JP Carter (trumpet), Jesse Zubot (violin), and John Walsh (bass), we were treated to a musical performance that soared into the northern Alberta sky and elevated the event to stratospheric levels.  I understand their soundcheck earlier in the afternoon took several hours.  It was worth it, because the end result was extraordinary. 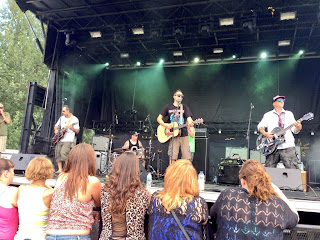 It was terrific that three accomplished local groups were able to share the NEXEN CanadaROCKS bill.  The Sentimental Gentlemen, Friends of Jack, and Destranged did a superb job by all accounts. I was pleased to hear a lot of original music and a breadth of talent that deserves a wider audience like the one afforded by this event. 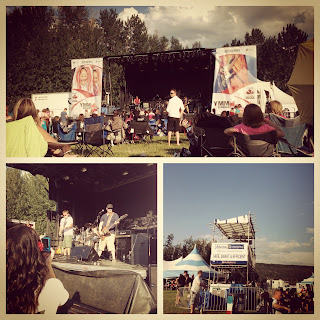 Last night's CanadaROCKS concert was wonderful, with a stellar line-up, excellent site, lots of amenities including an amazing contingent from the Wood Buffalo Brewing Co. keeping everyone in the beer garden lubricated.  But the elephant in the room that we need to talk about is attendance.  We need to come out in larger numbers to support these world-class outdoor music events.  The investment in infrastructure, talent fees, and logistics is intense.  If we don't use it, we could lose it.  I may have been way out of the Simple Plan demographic, but I enjoyed myself immensely, and quite by happenstance ran into a band that blew my mind and will forever have a place in my playlist.
Email Post