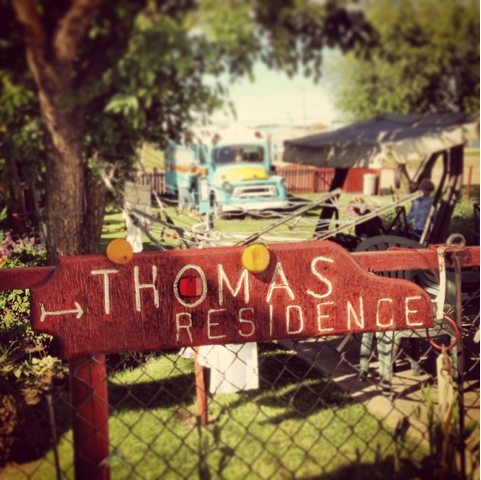 If you'd have told me the drive was going to take 16 hours, I might have been less excited than I was to hit the road. But, after hours and hours of driving, time seemed to pass fluidly, effortlessly. We arrived in Kamsack at 9 pm, after leaving at 5 am from Fort McMurray. Since getting here, time has slowed to a crawl - the "being-at-home-effect".

Having spent the first 18 years of my life in the place that has only changed in small and acceptable increments in the decades that have followed, it feels like home immediately, like a preserved quadrant in my brain, complete with floor plan, sound inventory, quirks and plumbing that requires accomplished finesse to operate. 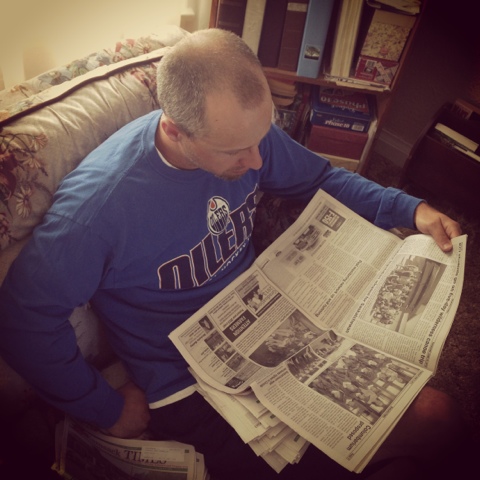 There is a ritual established, by myself and my brother Doug, whereby yellowing editions of The Kamsack Times are piled up in their spot on the bookshelf, waiting for the two of us to flip through its pages. We seem to be the two main proponents of the practise that I'm aware of, catching up on the sediment, suspended solids, and photographic memories of a year's worth of water that has passed under the bridge.

Several stories and obituaries leap out, reminding me of those I knew that had left us and some that I didn't. 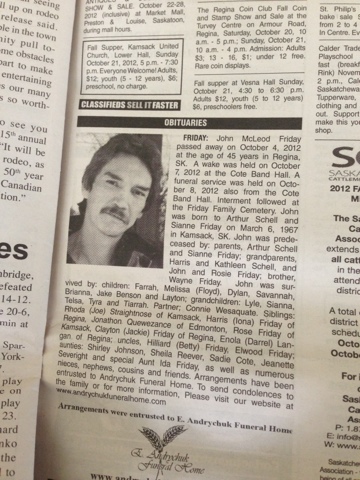 John Friday was my age, a bully from my youth, who died last fall, just a few months older than I. We were playing football on what is now the local RCMP detachment property.  Then a patchwork of grass and weeds, now a beautifully landscaped facility adjacent to a skateboard park, we were trying to play a game of football when John ambled along and began taunting, bullying, and shoving. Something snapped with me - a 12 year old kid at the time - and I decided, or my body decided, to shove back. I went after him, my brother Keith jumped in, and we sent enough of a message that he never bothered us again. Now he is gone for good. It makes me sad to be honest. I'm sure he was less menacing than he appeared, that he loved and was loved.

A year ago when we were home in Kamsack, we ventured out to "the farm", the place where my father was raised, and his father.  It is a spot of land that has been in the family since the early 1900's, started by my great grandfather now farmed and owned by my Uncle and his son. Next door, the quarter over, is the Danyluk farm. Eddie and his wife Charlene had us over for coffee and a visit; she lively and vibrant, he, hooked up to oxygen and moving slow. He passed on since we were last here. I'm glad of the visit we had, and the memories shared. 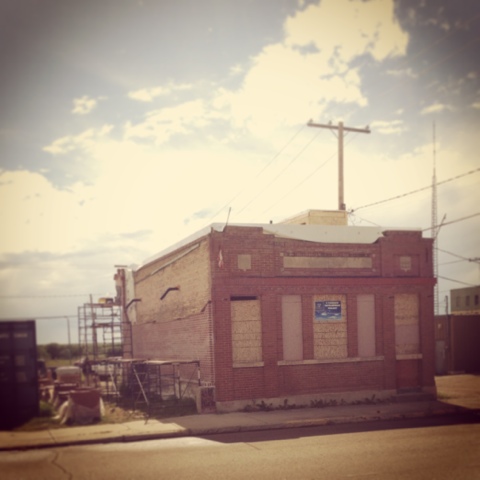 Walking around this town is a dance with the past, a brush with the present, and a glimpse of the future. Next door to the seniors centre, a long-abandoned Government Telephones building is under the knife, being renovated and restored by a fellow, a year younger than I, who made his fortune in the oil fields of the middle east. The contractors are doing a great job, preserving its historical value, and turning it into an apparent office, rooftop garden and lounge.

"Wealthy people tend to be careful with their money," observed a local business person, knowing the buckets of money being invested in the restoration effort. "It makes me wonder what he knows that we don't know."

There is an uncontrollable romanticism about a hometown, at least for some of us. Somehow, I would guess that in the case of this wealthy investor, the heart may have overwhelmed the head. I would also guess that he's comfortable with that, having earned the privilege to be a little wistful with his money. 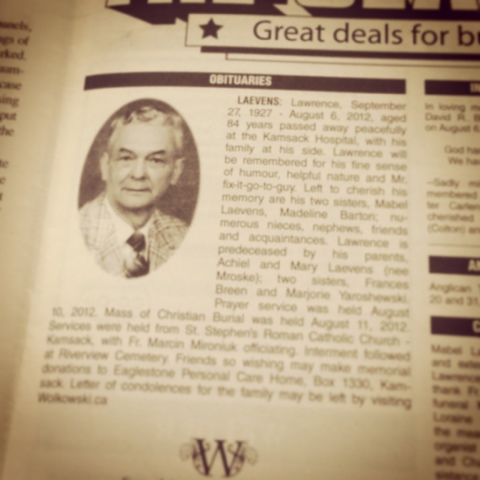 Since we were last here, Lawrence "Mr. Fix-it" Laevens died. He was a lifelong bachelor who lived with his sister next to where my grandparents lived when they were alive. He had a garage with every tool and gadget known to man and was the guy you called when something needed building or fixing. The desk that still sits in our family study was built by Lawrence in 1984, a birthday gift as I approached my Grade 12 year. I'll never forget the strong smells that emanated from his overflowing workshop, an intoxicating melange of chemicals, paint, fibre glass and sawdust. 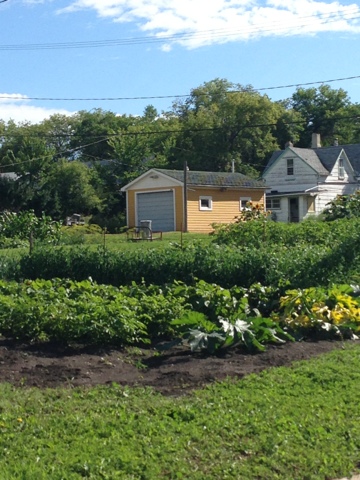