Heather and I have begun a practice where we go walking every evening.  She has concurrently started an intention to try to get to bed a little earlier. So, last night, as a big black cloud approached from the west, and as it was already getting close to 9 pm, I suggested we attempt to beat the storm and do a quick circuit around the neighbourhood.  The rain started falling as we made our way up the sidewalk back to the house.

As I spent a few minutes in front of the computer and Ben finished watching the latest episode of Bones, the steady rain turned torrential.

"It's hailing," yelled Heather from the living room, as I vaulted up and out to the picture window to watch the action. 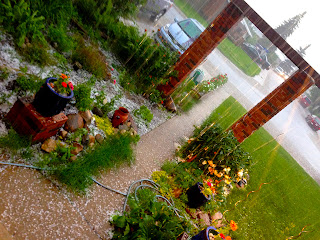 The sound got louder and louder as the intensity of the deluge grew, as did the level of the water at the intersection of Demers Drive and Armit Crescent. 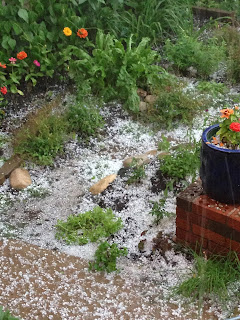 The garden was littered with small white projectiles and Heather's stone pathway was submerged.  The ground, already saturated with moisture wasn't amendable to letting more in. 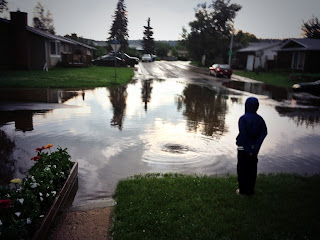 It began to die down and Ben dashed outside to play in the ebbing rain, followed by Heather wrapped in a blanket, feeling a little chilled from the drop in temperature that had occurred as the clouds rolled in through the evening.  I decided to follow their lead and trotted outside in bare feet, eager to dip my toes into the rising water that had filled the roadway and sidewalk.

"It's so cold," I said, completely surprised at the temperature of newly formed Lake Demers.  But as I looked around and saw hail pellets everywhere, I realized that the cold temperature made sense.  There was a lot of ice in this particular drink.

It took a few minutes for the storm water system to catch up, but by the time I walked to the end of the block and back, Demers Drive had returned to normal, the temporary lake a trickling memory, the sidewalk covered with a layer of fine silt.
Email Post