The magic of open space

Do you ever notice that the best discussions happen after the meeting?  Yup.  It happens all the time.  Once the agenda is put aside and decorum dissolved, real dialogue ensues.  In essence, that is what open space technology (OST) might be about.  I say "might" only because I'm a neophyte.  My FuseSocial colleague and friend Alexandra introduced me to the dialogue framework a few weeks ago.  It turns out that I've been doing something similar for awhile now. 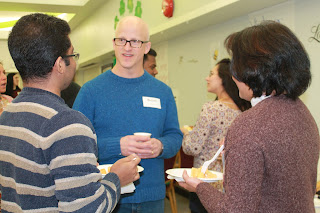 I facilitated a great session Thursday with the current Leadership Wood Buffalo cohort, alums and members of the community around the topic of community leadership development.  The question that brought us together was:  What do YOU need right now to be the community leader you want to be?

About 10 table hosts came forward and had terrific conversations on topics ranging from igniting passions to finding ways to link seniors with youth, from dealing with bullying to started a makers' space.

"It's not what I expected," said one organizer.  "But that's the great thing about OST.  You need to be prepared to be surprised."

In this kind of meeting environment, the "Law of two feet" comes into effect.  In other words, if you're feeling that you're not getting anything out of one conversation, or not able to contribute, you are encouraged to get up and find another.  The "Law of two feet" is one (of many) of the reasons I love going to Mindcamp (Canada's creativity retreat) every year.

There are guiding principles that govern open space, that do everything they can to minimize formality and eliminate any sense of agenda.  They describe, rather than prescribe, what happens in open space.

Principle #1 - Whoever comes is the right people - What an interesting sentence.  In essence, it takes away the stigma associated with when only a few people, or even no people, come to your table.  If you build it, they will come, every single one of them that are destined/intended/needed to be there.

Principle #2 - Whenever it starts is the right time - This is an important one.  I'm fastidious about time, but I can't rush creativity, nor should anyone.  The energy for creative brilliance will happen in its own time.

Principle #3 - Wherever it is, is the right place - You don't need to be in a formal OST gathering to be doing Open Space.  The beautiful thing is that it often happens organically.  Daniel and I went out for coffee one time.  Through conversation, unplanned and unexpected, we started drawing ideas on napkins and redesigned the world.

Principle #4 - Whatever happens is the only thing that could have - be prepared to be surprised!  - This process works when it goes to places that you didn't expect.  Thankfully, that's exactly what happened on Thursday.  The ideas and issues that bubbled to the top were not what I expected.  In fact, one issue that I was certain would emerge, did not.

Principle #5 - When it's over, it's over  - This is a reminder to us all to do the work not the time.  If an issue or idea has run its course, don't rehash old territory just because there is some time left on the clock. 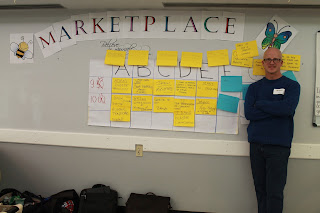 What I observed on this morning is that valuable information was shared, connections were made, sparks were ignited, and relationships were both started and deepened.  Some commitments were made and action might result, even though we had a limited amount of time to get to the action phase.

I'm grateful to Alexandra and FuseSocial for asking me to facilitate this session.  I'm grateful to all the participants for bringing their passion and ideas into the space and trusting the process.