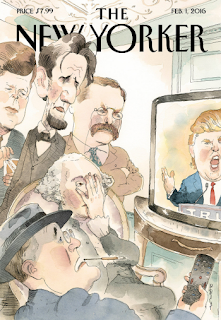 Open up CNN this morning and count the number of "news" headlines that include the word Trump. About an hour ago I counted 4 out the 11 top stories included a mention of Donald.  Why and how is this happening?  Very simple.  Media, and those who consume it - including Canadians by the way - can't resist a train wreck.   Everything that Trump says and does is like that twisted carnage on the side of the highway that every pair of eyes focus on. 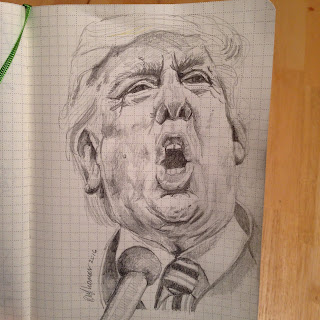 I've heard some Americans - including some very famous and prominent ones - insist that Trump is the best choice for this moment in history.  Trump's allure appears to be a backlash to something that has wormed its way into the hearts and minds of a large number of voters.  Has it been almost 8 years of Barack Obama?  Or, is it something deeper and longer than that; maybe it's decades of political psychobabble and double-speak?

In any case, momentum is building, and while the numbers suggest that Hillary Clinton would run away with the general election, look back a couple of months ago and see what they were saying about Trump's chances then.  The carnage on the ice slicked freeway is only going to intensify and the chances of a Trump administration are only going to increase.

My 17-year-old son Dylan talks about this race every day.  People in the office are chattering about it over coffee on a regular basis.  And Canadians as a whole can't avoid looking across the 49th and watching the circus.  Imagine what it is like on the front lines.  Imagine the intensity and irresistibility of the vitriol, bombast, gaffes and guffaws if you're actually someone who is going to be voting.  It truly is a runaway train and it's not only going to leave the tracks, it's going to careen down main streets across America.

Barack Obama's election 8 years ago was fuelled by a movement of a different flavour.  It was a grassroots, viral spread of an idea about possibility and hope.  It was also a backlash to 8 years of George Bush, 9-11, phantom weapons of mass destruction and Guantanamo Bay.   If you could distill the ideas that are driving Trump's popularity - putting aside the train wreck metaphor for a moment - what would they be?  What is the core of his strength and popularity?

NO FILTER - Trump says what's he thinks, often without thinking, and doesn't give a hoot about who he offends, isolates, hurts or disenfranchises. This idea of "tell it like it is" or "call 'em as I see 'em" seems to be a breath of fresh air to many voters.

NO FUNDING - Trump is only spending his own money.  Frankly, he doesn't need to spend a dime of advertising dollars.  The media (traditional and social) is giving him more exposure than we have ever seen before.

NOTHING OFF LIMITS - Trump has no fear of diving head first into tepid waters and spewing out crazy ideas like building a wall between the USA and Mexico.  People are drawn to crazy, bombastic and far-fetched notions that speak to their baser instincts. 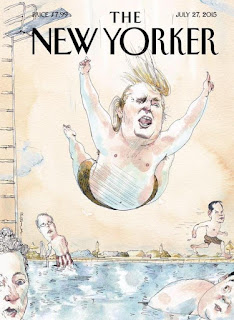 My hope is that our American friends have sober second thoughts when they go to the polls later on this year.  Because unless Trump is a closet bridge builder, diplomat, thought-leader and statesman, the USA would likely enter the most embarrassing and destructive four year stretch it, and the world, has ever experienced.

(with thanks to The New Yorker for the delightful, get shockingly appropriate, covers)
Email Post