This weekend, over 60 paintings will find their way to the MacDonald Island Community Art Gallery for my solo exhibition, "Wild Colour Portraits".  Never in a million years did I ever think I would have the opportunity to have my own solo show or be able to fill a gallery with that many pieces.  I've spent the last month figuring out what paintings I have access to - most are in homes and businesses scattered throughout Wood Buffalo with more and more going further afield, to places across Canada and the United States - and which ones will best tell the story.

One very special section of the exhibit will be dedicated to some of the individuals in our lives who experienced homelessness.  The final piece for this section was completed on Saturday and largely done live at the KD Gala put on by the Centre of Hope as a fundraiser for the United Way's community campaign. 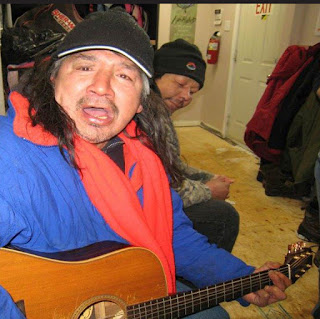 I started out with the intention to paint a fellow named "Penguin".  Stephen Bryant, Executive Director of the Centre of Hope, suggested the subject by telling a great story of how he used to love to play and sing.

"His favourite song was Sad Songs (say so much) by Elton John," said Stephen. 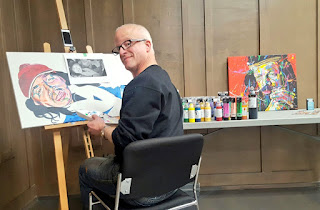 What I found out on Saturday and in the day that followed was that Penguin was actually Mathew Whitehead - one "T" in that spelling, shared someone on Facebook.  I also found out that Penguin actually earned a degree in social work.  Something happened along the way that altered his course and he ended up living the rest of his life on the street.

The other fellow in this painting is Billy Janvier.  He also has a story, and people who loved him and miss him dearly. 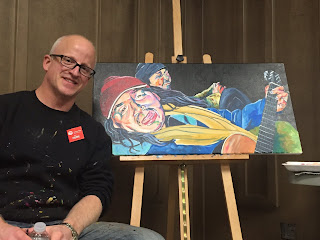 Penguin and Billy will be featured in this section of the exhibit with Carla, David, Rossi and Bruno.  My hope is that their presence will spark conversations and memories.  They deserve to be remembered and embraced, just like everyone else. 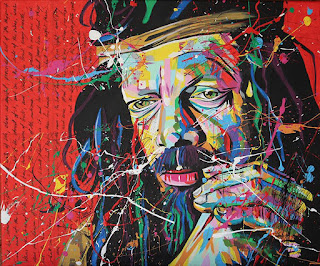 Bruno will not likely be recognized by anyone here in Wood Buffalo, as he came from my part of eastern Saskatchewan.  I wanted him to be part of this exhibit as he is a connection to my youth.  People in that part of the world would have a hard time remembering who the Mayor was back in the day, but everyone remembers Bruno.  He was a gentle, unforgettable character.

The painting of Penguin and Billy was sold for $2,250 to Bryce Kumka as a donation to the United Way's community campaign.  It will join Carla's portrait in the boardroom at Rogers Insurance when the exhibition is over, where it will undoubtedly spark even more dialogue.  A copy has been ordered for the Centre of Hope so that it can seen by the staff and patrons there every day.