Over the last week, I've heard dozens of new stories about the evacuation of Fort McMurray.  Woven into many of those stories are Bylaw, RCMP, and provincial Peace Officers who helped, guided, and in some cases, rescued. 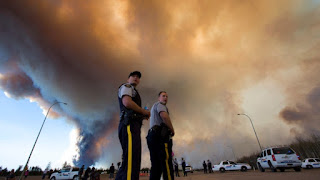 One of the clearest memories for me from May 3rd is seeing the officers at the intersection of Highway 63 and Mackenzie Boulevard calmly directing traffic while the inferno was growing just a few hundred feet away.

A client shared a story of going back into Beacon Hill.  The officer wasn't going to let her in, as it was becoming perilously dangerous at that point.  However, when she explained that she was going back to rescue her precious family pet, he acquiesced and let her through.

She darted into her home at the bottom end of Beacon Hill, scooped up the dog, and made her way back out.

"All of a sudden, the smoke was so thick that it was absolutely black," she recalled.  "We were having a hard time breathing inside the car."

Out of the darkness emerged the officer, the crook of his arm wrapped around his nose and mouth, holding his post, making sure she made it out safely. 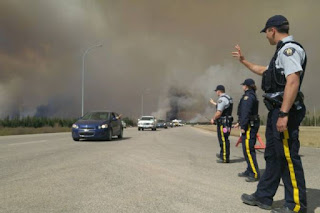 There were a lot of reasons that 88,000 people made it safely out of the community that day.  I'm sure luck, and the good Lord played key roles, but so too did the officers.  They stood the line when chaos and danger were swirling around them.  They directed and guided all of us to safety in the most chaotic of conditions. 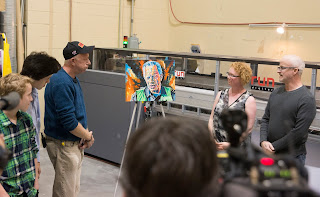 In May, I painted a portrait of Fire Chief Darby Allen that captures the gravity and weight of responsibility carried by all the fire fighting professionals.  It will be formally presented to the Fort McMurray Fire Department at the Oilsand Banquet on November 16th.  I spent all of yesterday working on a companion piece that will be presented to the RCMP at the same event. My intention is to keep it under wraps until then.

I've heard so much genuine gratitude expressed for the many first responders who saved lives and property.  Yesterday, I focused my creative energy on the officers who work tirelessly, enveloped by smoke, and demonstrating unparalleled commitment to public safety.  What they did will never be forgotten.
Email Post